Having written stolen and mashed up rules to create a Chainmail/Book of War hybrid Frankenstein monster, I wanted to make sure that the thing played well, and I wanted to see what comes up that I hadn't thought of.

And I wanted to give the model a shakedown, to see how it would be used by (hopefully) friendly faces before taking it to GaryCon to sit next to two other Greyhawk games taking place with the same topic - the goings on of the Temple of Elemental Evil and the infamous Moathouse. 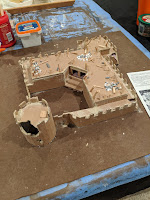 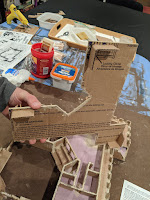 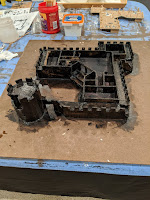 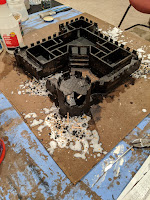 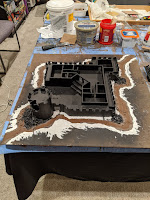 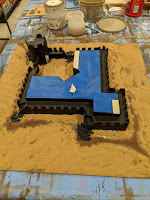 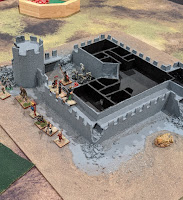 It felt really good to get the model to a point where I could play with it. Obviously, a lot of work left to be done, with painting details, making the mucky moat and surrounding terrain. The comments I got from players was very positive!


Playtesting - I had three concerns with the scenario and rules:
I ran one session on Saturday for Chris and Alex, two of my D&D players and members of the Northern Illinois Fantasy Miniatures Association. On Sunday, I ran a session for my D&D player Derek. 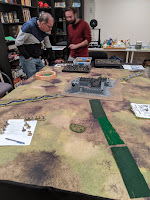 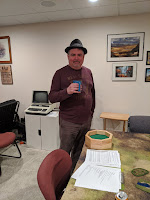 I'm happy to say that I got tons of great feedback from my very patient friends! Overall, they all expressed enjoyment with the scenario and with the approach of playing "D&D" with Chainmail as the battle mechanism. It became clear that what we had was more of a skirmish game than a huge battle. That turned out to be OK!

If you go and look at the rules, you can see a number of tweaks and approaches that I've adopted to reflect lessons learned. Here are the three big ones: 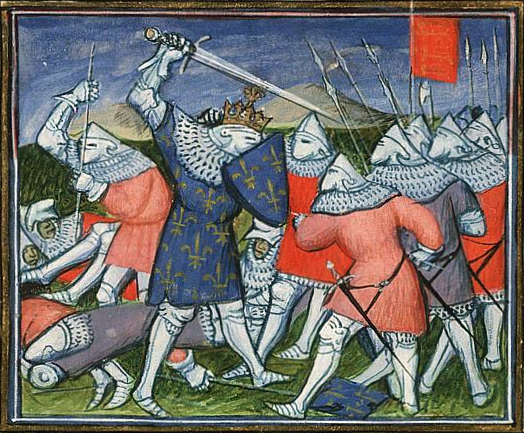 I. Having a character figure that isn't a superhero somehow take out a troop unit figure with just a single dice roll didn't feel right. The character should be a lot more threatened when they go against a unit of soldiers [1].

2. If battle is troop unit figure (representing 10 soldiers) vs. character/creature, scale the dice. Roll # of dice representing FC of unit multiplied by number of soldiers left in figure. Count hits against character. Character rolls number of dice equal to their Fighting Capability.

So, Rufus the Fighter is facing a figure of bugbears. He has an FC of 6. He is attacking as Heavy Foot (HF) and the bugbears are defending as Armored Foot (AF). In my rules, he needs a 6. He rolls 3 6 1 1 2 5, so he scores a hit! That means a bugbear will be a casualty out of the unit.

The bugbears return the favor. Their FC is 2. The figure represents ten bugbears. So the player for the bugbears would grab TWENTY six siders and roll. The bugbears attack as HF and Rufus defends as AF. With twenty dice, the chances are likely for at least 3 to 4 hits, so Rufus might be in trouble here...

THIS felt right, even though it would be murder on the characters - as it should be! Up to about Superhero level, a single character is taking huge risks to get involved in an Aragorn-esque fight against a bunch of baddies.

What helped was the adopted rule that magic armor removes a dice from each roll. So if ten bugbears are rolling 2 dice each, Rufus's magic armor made that 1 dice. Which, magic armor should have that effect. So this felt right as well.

It does mean I'm going to have to track the "hits" on a troop figure from characters. So that as the character whittles away at the troop unit, it grows less and less effective in attacking, meaning less dice to attack with. I'm OK with that right now, but I'm still considering if this is the approach I want to take.

I may revert to the approach of Chaos Wars and represent units as multiple figures - so it will look like a 1:1 game, although troops on troops will still be adjudicated at a 10:1 scale. I'm not sure yet. 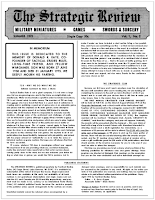 II. Magic and the different classes. At first, I was struggling with how to interpret the various bonuses and minuses from the gear that the inhabitants of Hommlet and Moathouse have with them. Through testing, we agreed to use the approach from "Compleat Chainmail" - if the defender (against ranged or melee) has magic armor, attackers remove a die from their roll. If attackers have a magic weapon, they add a die to their roll. This worked well for a convention game approach.

I also had to dig through OD&D history, original booklets, supplements and the Strategic Review articles to fill the rules and approaches for things in T1 that don't come in OD&D/Chainmail as written. Things like how to implement Elmo the Ranger (riff off the Ranger article from Strategic Review Vol 1, #3), the Druid Brother Smythe and his spells (look at Supplement III, Eldritch Wizardry), how does Lareth's Staff of Striking work in the Chainmail combat rules (riff off of AD&D/DMG description of the staff and have the player opt to improve a hit to be two or three, while spending charges).

That was a fun exercise in looking at how iconic classes were built, and how AD&D was still a similar game to OD&D in that you could easily use magic items from one in the other.

III. Crossbowmen are murder! The basic scenario has the Forces of Woe at the Moathouse, prepared with full knowledge of the approach of the Forces of Weal. This means that logically, the ranged forces are going to be on the ramparts, ready to shoot down any who approach. It's a sound tactic, used effectively through history. In the first game, I had written down the wrong range for crossbows, using the heavy crossbow range of 24" versus the actual range of 18". I also had two figures of crossbow units on the ramparts, to represent the 20 Guards of the New Master.

Had we run with the rule of multiple dice x FC of troop units versus single characters, I doubt that many would have survived the approach!

In the second game, I reduced the number of New Guards with crossbow to 10 soldiers (1 figure) only, but even with that, they murdered the approaching forces of Weal - taking out both single figures of mercenary bow and militia bow, then the elderly farmer captain armed with a crossbow.

The one factor in both situations was that the crossbowman had cover on the Moathouse's ramparts while the forces of Weal were out in the open.

I have a solution that is tied to the description of the terrain around the Moathouse.


A scrub of thorns, thistles, weeds, and shrubs grows thickly along the edge of the track which leads to the ruins, and even the track is mostly overgrown and cluttered with fallen branches and trees.
...
After two miles of distance, the land begins to sink and become baggy, as the track turns more northerly, and tall marsh plants grow thickly where cattails and tamaracks do not. Off to the left can be seen the jagged silhouette of the moathouse.
...
The bogs here stink, and the vegetation appears dense and prolific, but somehow sickly and unhealthy, creepers and vines throwing their strangling loops over the skeletons of dead saplings and living bushes alike. The rushes and cattails rustle and bend even when only a slight zephyr blows over the marsh, and weird bird calls, croakings, and other unwholesome sounds come faintly across the fen.

I had been saying that the only place where normal movement can happen is on the path/track to the moathouse. If you go off-road, you are in that thick scrub and vegetation, therefore you move at half movement. My fix here is to give anyone in the weeds the benefit of cover as well.

So it's a tough choice, go slow and with benefit of cover, or go fast and possibly get cut down. I think this is a good tactical choice, so I will leave the forces as-is, and playtest this approach.

Plus, I get to make more terrain! Scatter terrain to represent the bog/swamp around the moat.

There are a lot of other lessons and tweaks from the play-test, but these are big ones. I'm really glad I did the testing, it's going to make my Greyhawk game that much better.

Researching Greyhawk is interesting for me, because it's such hallowed, well-trodden ground in D&D lore. The Battle of Emridy Meadows and the Temple of Elemental Evil are well-known and beloved. This has led me to approach this scenario with a lot more preparation and thought than I normally do with my "plan a little, play a lot" approach.

I want players to "feel" like this is OD&D/Chainmail and that the game is accurate, for the most part, to how T1 - Village of Hommlet sets things up. Judging by how my testers reacted, they weren't all that familiar with Greyhawk, but they enjoyed the experience. So I'm hopeful!

[1] I blame Daniel Collins (of Delta's D&D Blog) for converting me to the view that many of the 'single person versus an army' fantasy scenes are just really unrealistic. I feel like it's a better game when I keep that in mind and take that approach.
Labels: Book of War Chainmail GaryCon OD&D