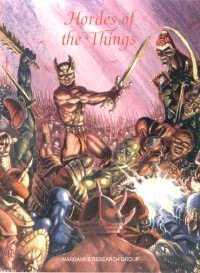 Kaptain Kobold over at the Stronghold blog has been holding forth on the game HOTT (Hordes of the Things) for years now. This year, they decided to play a weekly game of HOTT a year and record them as HOTT 52. This sounds like a great idea for me, and will allow me to get off my painting/modeling obsession (and Minecraft addiction -- you should see the "Empire" I'm creating in my world, all in Survival!) .. anyway, to actually play games.

I'm going back in time, though, back to the last published version of HOTT, 1.2, which is now available again on Lulu! After playing a version of HOTT that was updated for the latest DBA 3 rules, I've decided to go back. Not because the update HOTT2DBA3 rules are bad, but because a lot of HOTT play at conventions/events is still based on 2.1. I wanted to re-familiarize myself with the actual version.

I was reading through my well worn copy of the rules and kept finding odd notations that implied I had done something earlier, so I went through my Google Drive and found this:

The first page is written for my Etinerra campaign world, and I converted the measurements to inches because "'Murica", but the rules summary works very well as a one sheet/two page summary of the game.

Rather than try to do a huge big restart to my wargames campaign in Etinerra, I'm just going to play some games with miniatures and get to playing HOTT regularly, THEN I can see about tying things back to Etinerra. So this coming weekend, I will do two games to catch up with the weeks - last weekend was all about my playtest of Hommlet!

While I love Chaos Wars and still play it, HOTT is perfect for an hourlong game that gives me some fun, but doesn't require a lot of time.

Thanks, Kaptain Kobold, for the inspiration!

[1] HOTT/Hordes of the Things is a fantasy miniatures wargame that uses a small number of figures to play out just about any fantasy setting you can imagine. It also allows you to make just about any army you can imagine, with an army list that ranges from high Tolkein fantasy, to Asian Indian mythology, to Discworld and even Christmas Land! The rules can be interesting to interpret, with "Barkerese" on the same level as "High Gygaxian" in terms of writing. There's a ton of help on the web and my reference sheet to help you with the rules!
Labels: Chronicles of Etinerra campaign HOTT HOTT52 wargames