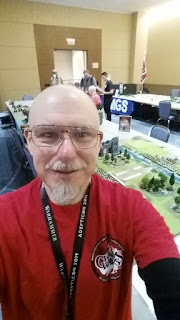 Michael is the host of a companion podcast, The Dungeon Master's Handbook. You can find that podcast on Anchor, iTunes, Google Podcasts or even YouTube!

Michael is a champion of the "Three Hexes" campaign starter concept  - an idea that you don't need a ton of work to start a campaign. He's currently publishing the Three Hexes 'zine, which can be found on DriveThruRPG. You can also read the blog posts that started it all.

Michael is one of the two authors who created the One Page Dungeon. He also wrote the Swords & Wizardry Quick Start module and has contributed to magazines like Fight On! and Knockspell.

When he’s not running games, painting miniatures or writing about D&D and wargaming, Michael also raises 5 children/6 grandchildren, works in IT and takes care of ThePrincessWife. He rides his Harley when he can, and the PrincessWife is usually on back yelling “WEEEE!”