HOTT 52 - Relearning the rules for the first two weeks.

I played two games of HOTT (Hordes of the Things) this weekend, to do my first two weeks' games for the HOTT 52 challenge. I'm now caught up so that I can do a "game a week" - I've got things set up so I can quickly generate a battlefield and two opposing armies, based on my Etinerra campaign world. Currently, I only have humans, orcs and goblins. I guess I might now have some motivation to get some elves, halflings and chaos humans!

So what happened in these battles? 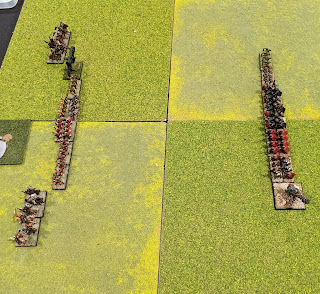 The human army watches nervously as the orcs march over the plains grasslands towards them. The humans are set up to defend their encampment. The orcs have brought a mountain ogre with them, truly a fearsome behemoth! The humans have a flock of Giant Ravens, which they immediately set loose into the air! 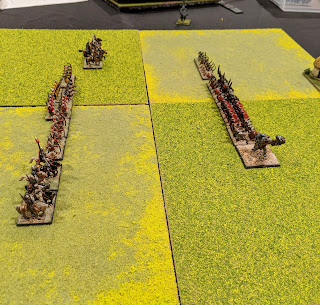 The armies slowly approach each other. The orc and goblin archers quickly shoot down the Giant Ravens that the humans sent to their right flank. Knights of the Duchy make to follow. 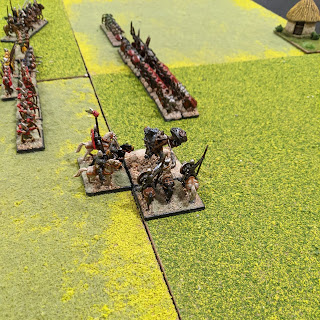 With a bone-shattering roar, the mountain ogre charges the humans commander and knights on their right flank! The knights are able to withstand the charge and flank the beast, dispatching it! The orcs and goblins howl in dismay! 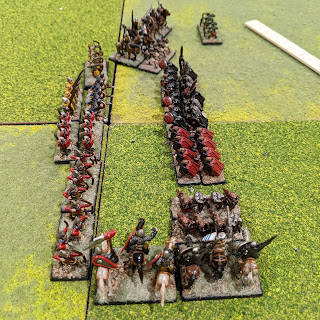 The orcs seek to close to combat, with their left side spear turning to face the flank attack by the human's commander and knights! On their right side, the orc and goblin archers rain arrows on the approaching human knights. 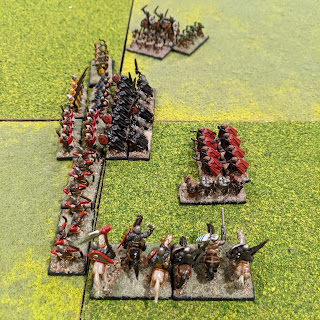 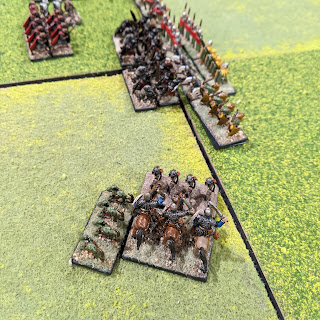 The bestials join in combat against the human spearmen center! While the knights seek to press their advantage to the orc's left, on the right, the situation grows more dire for the knights, who are falling to the orc's and goblin's deadly missile fire and skirmishing attacks. 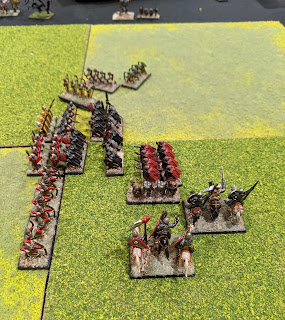 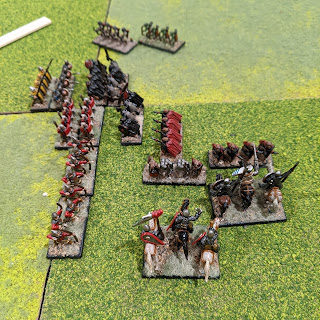 The bestials press their successful attacks to the human's left, having defeated the knights and then the militia bowmen! The lines of combat dissolve into chaos, but the human spear and commander's knights are too much and the orcs lose their warchief and half of their forces!

Their attack blunted, the bestials sound the horns of retreat and melt away into the plains, leaving the humans to regroup and count their losses.

I set up this game to be simple with no terrain, so that I could focus on remembering the rules. There were a few things I had forgotten and needed to remember in playing HOTT, such as Knights pursue if they destroy their enemies or force them to recoil. I also had to remember that if a stand is in support of another stand, and the front stand is destroyed, the supporting stand is lost as well!

There was a lot of pushing and shoving in the center, it was the action on the flanks that made all the difference!

I've created a different version of my HOTT reference sheet for my use. If you're interested, it's here: https://docs.google.com/document/d/13-9aZ1NurA6ZzRK4_Bj04bmNYYMirzewK1G_uZZ2SmU/edit?usp=sharing

This document is geared towards my campaign world and the forces I would normally use. I put all of the HOTT units on the last page, in case you want to use that instead. 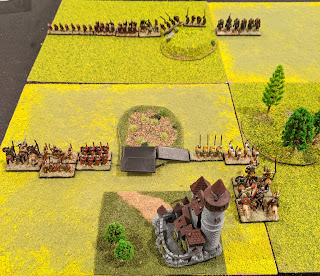 The orcs were on the move again and threatening the human's castle. The human commander assembled her forces as best as she could, given the woods to the right of the castle and the marshland to the front. She sent in her doughty (and apparently invisible! [grin]) warbands into the swamp to hold the center. 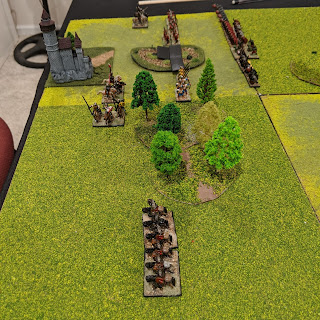 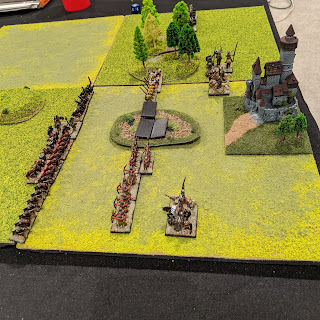 The orcs sent their riders around the woods to wait for the right opportunity to press the attack, or disrupt the human's defense by being a possible threat. The human's command and knights took watch, leaving the rest of the troops to defend the line. The orc line approached. 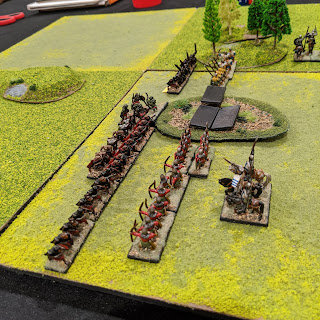 The humans held steady, raining missile fire on to the orcs flanks, consisting of their heavy blades, while the goblin warbands approached the marshes.

Then, in a complete surprise, when the orc line rushed to attack, the unit of blades that the orc warchief was in suffered a grievous defeat! The bestials were dismayed and the attack faltered as they retreated.

I had also forgotten that in HOTT 1.2, if you kill the opposite side's general and they've lost more AP than you have, then you win! When the orcs roll a 1 and the humans roll a 6, bad things will happen. It was a quick kill, but a fun game. I am going to replay this same scenario and even perhaps the same strategies and see how the battle turns out differently... keeping my generals safe however!

I also realize how silly my empty warband stands look, so today, I made an order with Splintered Light for their Late Saxon Fyrd set - twelve 15mm figures. This will give me four human warband stands, more than enough for future battles against the bestial armies!

Question for you, my loyal henchfolk, if you've made it this far. Do you like this style of recap - where I set it as if it were a journal of the battle?

I enjoy reading and writing this style of recap, but I know that recaps can be hard for many to enjoy. To me, thinking about the battle in terms of how the campaign world would see it and record it into history is interesting!
Labels: Chronicles of Etinerra campaign HOTT HOTT52 wargames