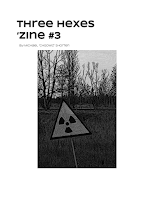 Not all campaigns are fantasy based and Three Hexes isn’t just for fantasy. You can take the idea of starting with only three options and use it for any genre. This issue of the Three Hexes ‘zine proves that.

There are campaign starters here from post-apocalyptic Earth to a Dyson Sphere to a “what if the Axis powers in WW2 developed super humans first?”. Ride along with a German unit suddenly transported to a fantasy world, jump into political and extraterrestrial intrigue at discovering we were colonized 150,000 years ago and see what happens when the Windy City of Chicago becomes the center of an interstellar/extra-planar transportation system.

Here's what's included:
With each rewritten/udpated Three Hex starter, I’ve included an extra, such as random tables, further idea prompts, an NPC or two and some factions for you to add to these starters.

What are Three Hex campaign starters?
In 2018 - 2019, Michael "Chgowiz" Shorten wrote 52 blog posts using his "Three Hexes" format for campaign starters. The idea is that with just a theme, a homebase and three hexes, a Game Master can come up with a great campaign that players will want to play! With a post-a-week (or thereabouts), he created a wide variety of campaign starters for people to use, riff off of or fold/spindle/mutilate into there own game.

This PWYW 'zine series will take these posts and rewrite them, improving on the original post and adding new content - an NPC, item, plot element or even expanding on a location!

I am an affiliate with DTRPG and can earn a small amount if you choose to buy other titles from there. I appreciate your support!
Labels: Three Hexes