HOTT 52 - It's all about the lines and remembering the rules correctly!

I took a quick moment to knock out another game of HOTT over Friday night/Saturday morning. It was a quick game, as I'm starting to remember how things flow and the combat factors/modifiers. I did have one unique situation come up that I'm going to ask the "experts" on.

I have a whole gaggle of elements for orcs, goblins and humans. From these many stands, I can generate quite a few armies, so I have tables that I roll against. The biggest determining factor is if the army is mostly militia, mostly regular/professional (trained) or a mix of the two. 1d6 tells me who fights who! I also found that the "random" generation of terrain once again was lumping it into one side of the board, but I went with it. I am working on flatter replacements for HOTT. 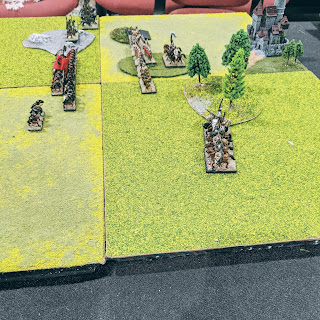 Once again, a Human army was defending their stronghold against a force of Orcs and Goblins. The human commander sent their knights dashing to the left around the woods, in hopes to threaten the Bestial's right flank and peel off some of the elements from their long line. 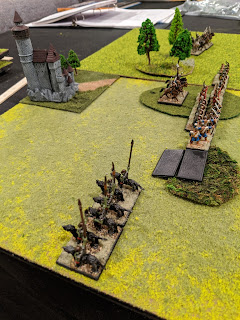 The Orc Warchief had a similar idea and sent his goblin wolf riders dashing past the humans and the rough terrain that was ill suited for the woods-friendly goblins. They had an excellent view of the human stronghold and the human commander themselves! 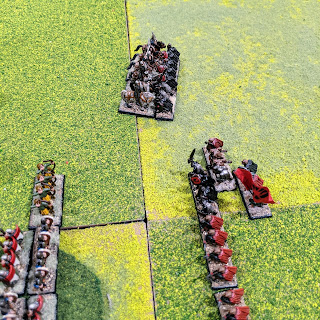 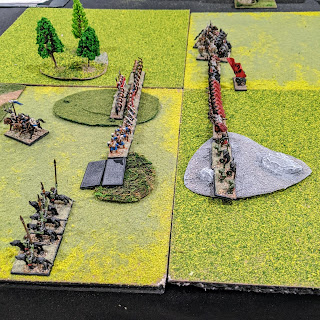 The Orc Warchief details two elements of blades to confront the flanking knights. They are evenly matched and the Warchief prays to Moloch that his "Bloody Fangs" will rend human flesh! Meanwhile, the orc line starts to shift and expand, to hopefully overlap the humans! 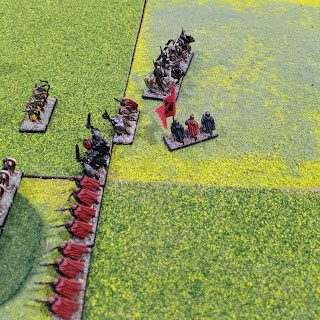 The Warchief's prayers to Moloch fall on deaf ears, or the foul God was unimpressed, as the orc Blades fall to the human knights! Meanwhile, the orc line marches towards the humans and falls under their missile fire. Several units recoil from the casualties and the advance is blunted a bit. 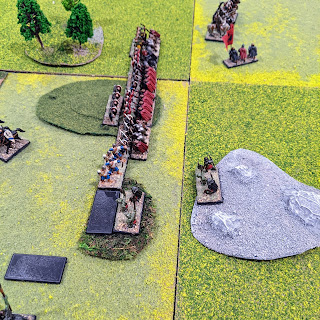 Desiring to retake the initiative, the Warchief orders his troops to close to attack! The human commander decides to detail a warband to confront the flanking wolf-riders. 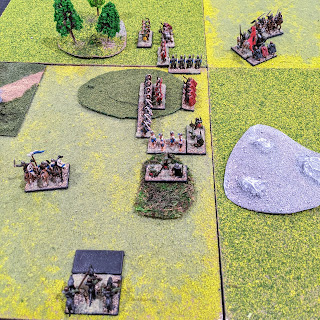 The battle goes badly for the attacking bestials! Orcs fall to the spears and blades of the defending humans and the warband destroys an element of the goblin riders! The goblin warband manages to turn to flank the human line, but the brave archers from a nearby village manage to hold them off! Desperate to regain some initiative, the Orc Warchief closes to give battle to the Knights, only to see his personal bodyguard driven back! 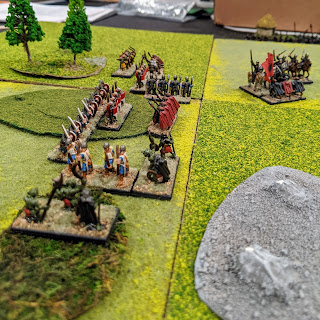 The casualties mount for the Bestials and the Warchief reluctantly orders the withdrawal of his forces from the field of battle. The humans cheer in victory - their losses were light and they'd given the Orcs a Bloody Nose instead of facing Bloody Fangs!

The dice told the story of this battle as well. The Orcs/Goblins lost 12 AP and the humans only lost 2 - a resounding victory! I expected the long line of the orcs would come into play, but the knights flanking and some timely shooting that resulted in the orc line splintering really set the tone of the final outcome.

That is something I like about HOTT, getting to the meat of the meal quickly!

My only question was regarding this one situation. 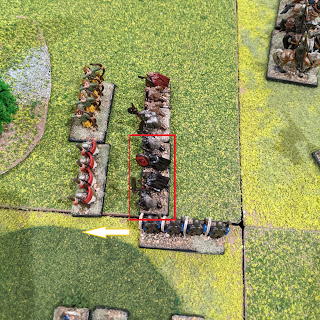 The humans attacked the Orc Blades (outlined in red) in a front/close the door flank attack. The orcs scored VERY well and forced the frontal human spear to recoil.

Now, at this point, I had forgotten about a rule in HOTT which I **JUST** remembered and confirmed right now...

So both the frontal and flanker should have recoiled, but I didn't recoil the flanker!

Instead, I became concerned as to whether the blades should turn to confront the flankers, or proceed forward towards the frontal spears. I made a dice roll and they turned to face the flankers. Who ended up destroying them anyway. So I guess I just answered my own question of which was the right choice in my own blog post.. NEITHER were the right choice. Duh. (smacks my forehead).

This is one of the reasons I'm not throwing in a lot of extra elements like magic, gods and the like for now... I just need to get the basic rules down!

I did get my 15mm Saxons for my human warband elements, to fill those empty Wb stands; they are jumping to the front of the painting line. I do need to buy a 15mm human mage, priest, and make some orc/goblin/human hero elements. THEN move on to more land elf, sea elf, chaos humans, kobold, halfling elements...

It never ends, does it. The madness. The obsession... *happy sigh*
Labels: Chronicles of Etinerra campaign HOTT HOTT52 wargames