I fought my HOTT 52 Week 4 battle over lunch today and had a blast! I tried out the Magician unit for the first time. After the battle report, I'll give you my thoughts on this unit and how it plays out.

To create my armies I have tables that represent armies when they're all militia, all regular/professional, or a mix of the two. Regular armies have (more) elements like heroes, magicians, blades and knights. Militia armies have more of riders, warbands, spears and hordes, plus the cleric that sees to the needs of the common folk pressed into service! 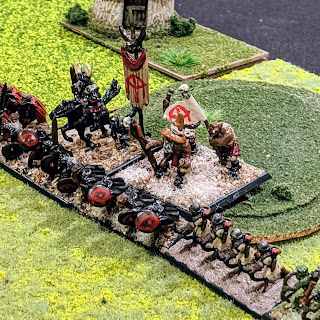 The orcs were supposed to have Spear x3 and Hordes x2, but I swapped them out for the Orc Shaman as my Magician experiment. 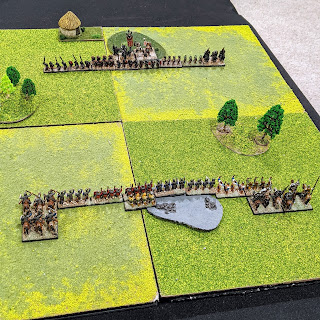 The orcs lined up outside of their camp, howling and cursing at the humans who appeared on the horizon. They anchored their right flank with an impassable hill.

The human commander put her knights and riders on the flanks with the intent of sending the speedy riders to threaten the stronghold or Orc reserves. 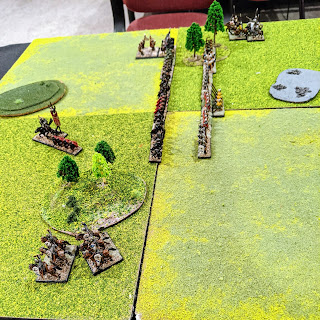 The Orc Shaman Oz'turk, seeing the hateful Human Knights to their left, moved over to that flank, preparing foul spells to cast at them. Meanwhile, An'Burkag detailed a unit of Orc Spears to line up with him to prevent the Human Riders from flanking them or attacking their camp! 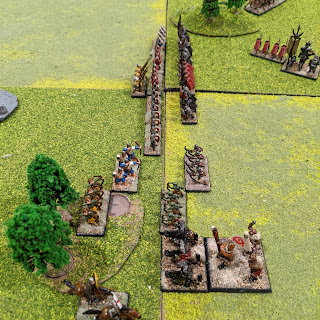 The Human army rolled down on top of the orc defense and pushed them all back! 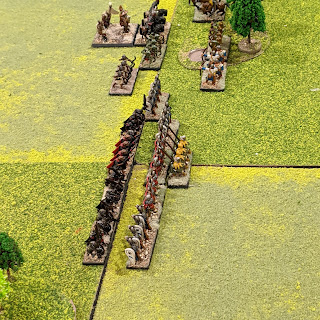 Undaunted, the orcs and goblins gnashed their teeth, gripped their cold iron weapons and charged back at the humans, pushing them back! 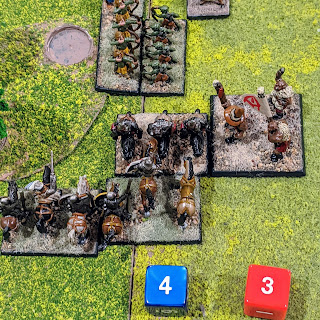 The human knights, seeing a potential trap, charged at the flanking Orc knights. With nowhere to go, the retreating Orc Knights crashed into the melee between goblin and human archers. The unit broke up! Unfortunately, the impetuous Human knights made a mistake in turning to attack the Orc Shaman. When they attacked, they were overcome by his foul magicks!

(In HOTT, if a Knight (Kn) attacks a Magician and suffers a minor defeat in that same bound, they are destroyed! I had to reread that rule several times to make sure I understood it. It's subtle in the wording... if the Magician had charged/initiated contact, then the way the rule reads, the Kn would not have been destroyed!) 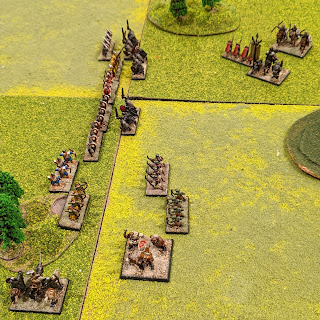 The Orcs also protected their rear/right flank, with the Orc spear destroying the light Rider cavalry. The orc line, however, suffered several defeats and began to fragment. 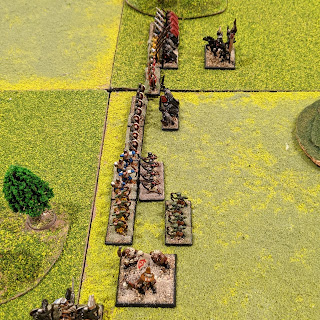 The human army pressed their advantage and pushed the orcs back. Warchief An'Burkag raced to reinforce the line and the Shaman Oz'turk rained spells and curses on both the flanking knights and units in the humans army, but they had little effect. 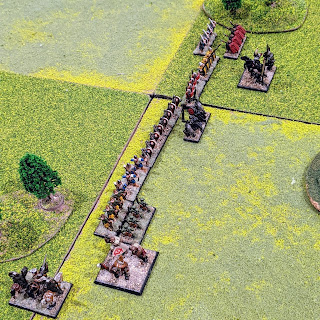 In the end, the orcs were unable to mount a serious defense and An'Burkag was forced to sound the horns of retreat. The humans marched upon the remains of the camp and burned it all to the ground, celebrating a hard fought victory!

Orcs: 12AP lost, Humans: 8 AP lost.
I rolled quite a few 6 to 1 combat rolls, in favor of the humans, which almost always spells defeat for the orcs. Once the line developed gaps, the bonuses for overlaps from the intact human line spelled the story out. Which was surprising, as the defeats on the flank really blunted whatever advantage I thought the humans would need.

So.. the Magician unit. Fun! It's basically an advanced artillery unit, being able to launch spells at 3x the distance of shooters, a little further than regular artillery. It does require PIPs though, so it requires a choice to be made between moving a unit or two, or using spells. Unfortunately, out of 4 attempts at a spell, only one had any sort of effect (a recoil), so the results weren't as good as I hoped. I was taken by surprise at the result of the Magician killing the Knight unit, though! I'll remember that for the future.

I don't know how this would have turned out if the Orcs had kept their Hordes and extra Spear unit, but it was a fun element to play with. Now I need to try a Cleric... and I need to buy 15mm human Wizards and Clerics! I don't have any!

PS. If you're curious about my force composition tables, as well as how I conduct my fantasy wargames campaigns, here's a link to my rules. https://drive.google.com/open?id=18CUi40wW6OSm4FhTzdOoH-ct0NxW9jImGyF-okiMOrk
Labels: Chronicles of Etinerra campaign HOTT HOTT52 wargames