Campaign: Lord Stephen and the Nightshade Wizard fought their duel two centuries ago amid the lush lands of the Vale, devastating the land into the Ruined Wastes that are now home to foul creatures and wild chaotic magics. Neither foresaw that the titanic arcane energies they unleashed tore rips in the boundary between the Material Plane and the Negative Plane, a place that is similar to ours, but different - twisted and obscene - and accessible by those who seek out these rips. The world disc has recovered from their battle, but the effects of the Negative Plane leaking into our own have been more pronounced of late, causing the Lords of the Land much concern.

Homebase (Hex 0) (0002):
Material Plane - Hammsburge - The closest city to the Ruined Wastes features a tower called Stephen's Lament, where Lord Stephen was rumored to have wept before The Duel, and where pilgrims today go to pray and weep as they punish themselves in the Ritual of Flagellation.  Strange fey elves and dwarfs ply their wares in the Marketplace among the curios and adventure seekers who fill the Inns before leaving for lands beyond. The city council is desperate to squash business-killing rumors that travelers are disappearing in ever-increasing numbers and are actively ignoring warning signs that things are about to get much worse.

Negative Plane - The Ruins of Hammsburge - Full of the undead and ruled by a strange being who calls himself The Lord, these twisted ruins of a city stick out like white bones from the gray, blasted earth. Mockeries of the grand buildings of the Inner city stand like obscene decorations across a graveyard of dwellings and businesses that form a ring of death and despair. The wind howls through the open doorways and broken windows, carrying screams of pain and fear, not allowing any from the Material Plane any peace if they find themselves here. 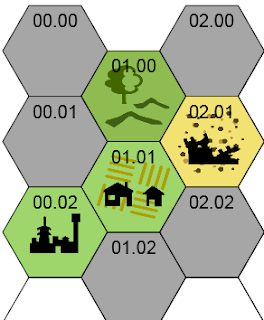 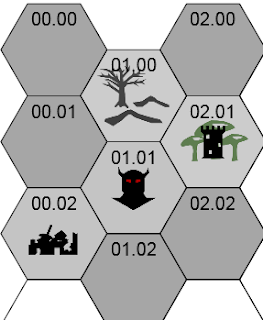 Location 1 (0100):
Material Plane - The Deepening Hills - The forested hills of Deepening are home to the fey elves and secretive dwarfs, once fierce opponents but now tolerant neighbors; having lost their ancestral homes once located in the lands of the now Ruined Wastes. Both races feverishly work on magicks and plans to heal the Wastes, but are constantly frustrated by the chaotic effects of the Negative Plane as well as their own opposite natures to each other. Travelers through the hills and forests should expect that their journey will be full of dreams, odd encounters and chance happenings that will affect them for the rest of their lives.

Negative Plane - The Graves of the Earth - As inhabitants from the Material Plane find themselves marooned in the Negative Plane, they find themselves drawn to the Graves to mourn for their situation, hunt for ways to cross back over and seek solace in companions. Those of the Negative Plane who are prey to "It" and the demons flee here, adding to the misery of the masses who huddle among the broken trees. The hills are full of sepulchers and barrows, their (mostly) dead inhabitants witnessing to the horrors that took their lives.

Location 2 (0101):
Material Plane - Farmlands - Despite being in the shadow of the Ruined Wastes, there are some hardy souls that scratch out a living in hamlets and small villages, providing a reluctant respite to the few travelers and odd adventurer. Signs of the cataclysmic struggle can be found in the strange holes, the odd cropped hills and huge chunks of rock strewn about the countryside, but the border between life-sustaining land and the Wastes is The Cliff; a clear geographic demarcation where the earth plunges straight down into the wrack.

Negative Plane - The Twisted - Th cruel hobgoblins and ogres have established many villages in this area, forcing the inhabitants to a tortured existence as slaves and laborers among the wretched fields of strange crops and fruits. The overseers of these places living in fear of the undead from the Graves and of the demons marauding from the Black Tower, establishing trenches and walls manned constantly. The lands between the Twisted and the Black Tower is a veritable no-mans-land of siege weaponry, magics and crude traps meant to keep out unwanted strangers.

Location 3 (0201):
Material Plane - The Ruined Wastes - The broken rocks, still-standing husks of trees, the blackened rubble of former stone buildings and the dust-filled empty river beds are what remain of the once lovely Vale, destroyed by the Invocation of Destruction. The sole remainder of the former breadbasket of the Kingdom are the Ponds of Tears, smallish pools of crystal clear water that are said to have been created by the tears of Lord Stephen when he realized what he had done. Twisted creatures call this area home, preying on each other and any foolish enough to travel here, but they are a minor threat compared to the strange rips in the fabric of reality in the Wastes, which allow denizens of the Negative Plane to emerge and claim the darkening lands as their own.

Negative Plane - The Black Tower - The lands around the Black Tower are a febrile mockery of natural growth and order, with strange fungi, tendril-laden giant mushrooms and twisting, tearing vines that ensnare unlucky travelers and drag them to the maws of flesh-eating flowers. The Black Tower itself is a perfectly smooth, tall edifice with an open archway, daring any to enter to face the entity known as "It" that lives within, commanding a legion of demons that flap and flit about the maze-like halls, preying on the unlucky who find themselves in the cursed tower. The demons outside regularly drag victims from surrounding areas to the Black Tower to feed the forests and those within the tower, as well as to face "It" and feed it with their terror and tears.
The influences of Stephen R. Donaldson's "Thomas Covenant the Unbeliever" novel series and Stranger Things should be obvious. Both are stories and examples of world-building that I love, and will unabashedly steal from. Technically, this is either two three hex maps, or a six hex map, but hey... I couldn't miss this opportunity! And I get to use "febrile" in my writing!
Every so often, I post "Three Hexes" - simple campaign starters to show that you don't need to do a lot to have interesting settings for people to play in. Feel free to use these in your game, campaign or as ways to spur on your own creativity and imagination!