Mines of Phandelver - Session #1 and 2 Recap 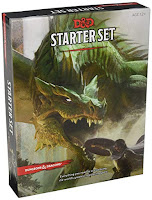 Yep, 5e. I'm running a game with it. Mainly so that I can #1, learn it, #2, use the free Starter Kit that I won at GameHoleCon (Thank you for the DM raffle!) and #3, just because I wanted to pull in other family members that enjoy 5e. It's a new experience for me and my wife.

It's... different. I'm learning it slowly, but we're all having fun. The group is myself as DM, my wife, my adult son (M) and two of my older granddaughters (DD and J). We are trying to play every Monday night for about 90 minutes. Corralling a very active 8 year old and pre-teen 11 year old takes some work!

Some spoilers are here if you haven't played the module and might do so at a later date. You were warned...


Session #1 ended, with much groaning and subsequent gloating about pancakes by the granddaughters.

In session #2:
And so session #2 ended here, again with the requisite groaning and excited instant-replays by the grandkids.

I'm teaching them a bit of table etiquette as well, such as to know that how they talk at the table could be seen as how their PCs are talking, and to wait their turn to call out what they want to do. I'm just glad they are having fun!

I think my wife may strangle them all, though. She is the tactical one of the bunch, trying to stay ON MISSION!
Labels: 5e Family Campaign