It was the 10th anniversary of our starting the Vale campaign and it was a momentous moment. Aeli had solved the riddle of the Three Keys and brought peace between the Thri-Kreen, Yuan-Ti and Lizardfolk tribes. With the keys joined together, a black portal opened, beckoning with a crackling hum and strange aura...

I had been planning this very encounter for almost seven years! Oddly enough, it was over very quickly, and I was sad that I couldn't really give word to the emotions that I felt when I was describing the scene, or speaking as the Watcher. I was trying to channel Parthunax from Skyrim for sure!

It's probably the fact that I could never fully realize what I saw in my head at this meeting. Angie seemed to enjoy it though, and that's the important part. One thing's for sure, she's beside herself in having a baby dragon as a companion! I don't have a picture of it (yet.)

Now I have to paint up the adolescent dragon so that she can ride it when it gets bigger! 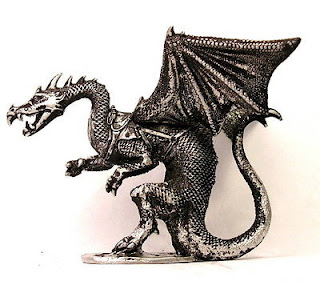