Campaign: The PCs entered the beckoning black portal, expecting to be transported to their home base, but instead find themselves stepping into a humid, thick jungle! The mountains are roughly where they should be, but there is no home town, no civilizations, only the call of prehistoric animals and a lake shore that wasn't there before! They realize that they've gone somewhere, perhaps back in time, or to a different alternative world, but first order of business is to find out if there's a civilization so they can get back to where they belong!

Homebase (Hex 0) (0101): Muddeskip - H A rough and dirty village of crude huts, a couple of long halls and even open lean-to's, full of humans living in the equivalent of the Early Dark Ages. They are vassals of the nearby Orc Warlord (0100), with half-orc outcasts in charge of the villagers who work the rough land in exchange for "protection" and "leadership." Despite the primitive nature of the humans, there are some goods available for "ugthun" (lumps of silver with the seal of an Orc Warlord) or service to the seller. 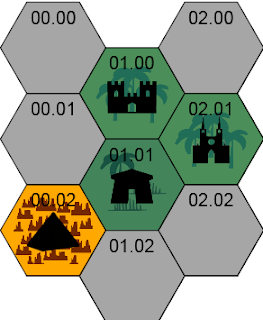 Location 1 (0100): Mal-throk - This Orc fortress city is as advanced as the human village of Muddeskip is primitive, serving as a center of technology and education for the area. The Orcs are very pious, very racist and very advanced in their status and station over humans, living in the equivalent of the mid to late Renaissance. Nash-grunz, the Orc Warlord, keeps control with an iron fist, not tolerating human "filth" who make trouble for his people, and all too willing to loose the Orc Legions upon the humans in the area to keep them in line.

Location 2 (0201): Kurnz-nin-wugronz - An Orc temple city, built upon and amid strange ruins that outnumber the homes and buildings of the priesthood and caretakers. Here, the unliving walk freely, allowed to act as they wish upon the lesser races that are brought to maintain and serve the temple. It is here, though, that rebel humans come raiding, for sources of wealth and objects of use in the maze of catacombs and passages underneath, guarded by the unliving and creatures of myth!

Location 3 (0002): Forbidden Area - A wasteland of broken and glassy rock, filled with strange sounds, stranger ruins and the source of wasting illnesses for orc/humans alike. Despite being strictly forbidden by the orcs and a subject of a near fearful taboo, humans have learned that this forbidden area is filled with strange artifacts of power, but only if scavengers can survive the strange and terrible monsters living within! The Orc priests and Nash-grunz have attempted to cut off access to these lands, but the humans have become very good at avoiding the patrols and venturing within to follow up on rumors of strange tall and short beings living within.