Campaign: Millennia ago, humans fled a dying Earth and found themselves on the world of Haines-Thoreau VI, an inhabited world with many races, none of which were particularly happy with the Terran refugees. Adapting to their minority status and to the violent climate changes due to the orbit of the planet, mankind has survived. They find that survival in jeopardy, though, as the titanic God-Wraths are coming to life, intent on their "punishment" of one of the races - and that race might just be human!

Homebase (Hex 0) (0100): Sitha - The floating city of the Talus - a water/air breathing race that is as comfortable in the water as they are on land, communicating through touch with their fins and tentacles. Many other races of the world come to Sitha to trade, valuing the strange flora and fauna that the Talus bring from the deeps. The city is considering moving away from its current location, as the two nearby God-Wraths are of great concern! 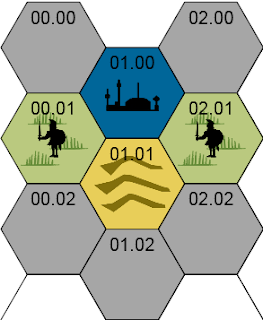 Location 1 (0001): Iyx -  The mud-creature race, the Iyx, are a long suffering race, seen by the others as meek and mild, easy to push around. They forget that the God-Wrath of the Iyx is one of the most powerful, the God of death and destruction! The Iyx do not forget and they have begun their rituals of suffering and repent around the slowly awakening 100 foot tall stone statue, seeking to spark its wrath and wreak vengeance!

Location 2 (0101): Knifedge - Long slashes of canyons and ridges scar these dry lands, said to be the wounds caused by the God-Wraths in previous battles with each other and a previously punished race. These harsh hills are home to large population of humans eking out a living among the "goblins" - small white, crafty creatures that regularly rob and raid the humans when they have something the goblins wants. Several human leaders want to stay to fight the races and God-Wraths, convinced that they've amassed enough arcane support among the wierdlings, humans that seem to have odd powers, but others are not so sure and are slowly migrating to other areas to hide.

Location 3 (0000): Uma - Here stands the God-wrath of Xntvq, a seventy five foot tall iron construct of the God/Goddess of smiths and craftsmen. This God-Wrath is tended to by the insect race of the Uma, who've created a town around the giant golem and celebrate with a market thrice every orbit of the planet. This is the only time the Uma allow visitors in for their five-cycle market, as they are otherwise extremely xenophobic, enforcing their borders zealously.