Ten years ago, I ran my first 1-on-1 D&D game with my wife, Angie. This past weekend, we celebrated that decade anniversary with a memorable game - my wife's character now has a dragon!

We've seen fits and starts in that ten years. For the first two to three years, we averaged a game of about once a month. Then it slowed WAY down, averaging about once every six months. Then a pause of a year or so.

Lately, we've been back to playing about once a week. I've been leaving our minis and game out on the table, so it's easy to go to the game room, sit down and pick back up where we've left off at. This has come at a critical point in her character's adventures - the culmination of a quest to find a lost mage's tower - inside was a golden dragon, waiting for her to arrive!

This game is a bit different than the ones I play tabletop or online. There's far more of a narrative feel to it. I have to interact with her in a far more active fashion than I usually do. A lot more hints and prompts. This isn't a bad thing! Merely a natural by-product of the way the game flows with us.

Angie has also started playing in our family 5e game. She plays a halfling thief and had a lot of fun in her first game, though her dice were as unforgiving as they usually are.

I really hope that she enjoys our next ten years of gaming... and hopefully we'll have more time continue sitting down weekly. I have really come to treasure these moments together with her. 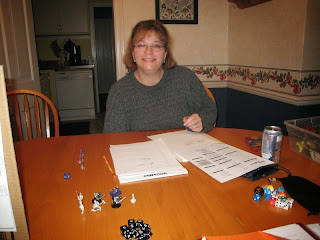 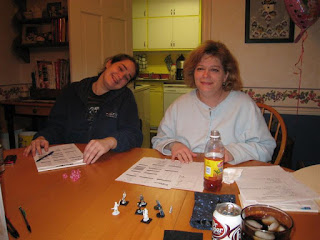 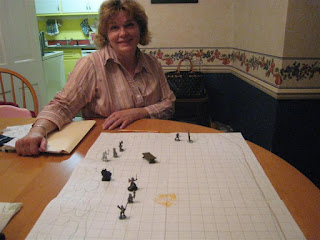 Hopefully a picture of her with her new dragon coming soon!
Labels: 1on1game solo game