[Three Hexes] The World vs Eddie! 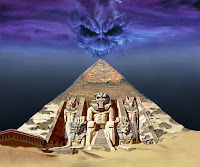 Campaign: Generations have toiled and suffered under the merciless rule of the evil entity known as "Eddie". The hordes of undead that roam the wastelands and wild lands serve Eddie in keeping the population under control through fear and death. A brave few rebels have stumbled onto a secret that could see the yoke of the despot thrown off, but will anyone survive facing the ultimate Power, and not become a slave to it?


Homebase (Hex 0) (0002): Femiron - Bordertown to the wastelands, home to a few long-suffering towns folks and quite a few scum and villany. A resolute town guard watches both the vagrants and for attacks of the undead, while some trade happens, mainly on scavenged goods and what little people can make. Rumors abound that a group of rebels has formed in the town, but many are afraid that the servitors of Eddie might swarm the town and kill everyone. 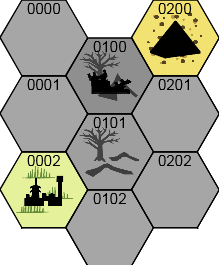 Location 1 (0000): Waste Lains - Once These desolate, howling wastelands are overrun by the undead servants of Eddie and horrible creatures, acres of blackened stumps and the charred skeletons of towns, evidence of Eddie's arrival and conquest. Scavenging among the ruins is possible, but few have made the attempt of late, and the maps are old and sketchy. It is said that one of the Lightbringer's weapons was dropped here and the elders are too afraid to send anyone to get it, for fear of awakening Eddie's eldritch vanguards.

Location 2 (0000): Lightbringer's Ruin - The stronghold of the only human ever to have enough power to defeat Eddie, but betrayed and killed. Surrounded by the strongest of undead, watching ceaselessly to ensure that the Lightbringer never awakens. Whispers that the tomb contains a secret to Eddie's demise, but none brave enough to dare enter, for fear of awakening Eddie.

Location 3 (0200): Pyramids of the Dead - Huge pyramid houses the throne room of Eddie, destroyer of the world. Strange creatures and lords of undead attend to the sleeping entity, and awaken him when he is needed. Constant lightning storms, desert, icy cold at night, brutally hot during the day. Nothing can live here for long.


Sometimes, it's just the obvious things that will trigger an awesome campaign. This was caused by a random Tweet that made me think of Eddie and Iron Maiden. Maiden has been playing in the back of my head about as long as I've been playing D&D. Eddie as a world-class super-villain that requires superhuman opposition? That's a campaign I'd run or play in! Loud and no apologies in the massive amounts of blood and gore. This has Warhammer Fantasy or even a sci-fi setting written all over it. Enjoy! Up the Irons!! \m/ \m/
Every week, I will be posting "Three Hexes" - simple campaign starters to show that you don't need to do a lot to have interesting settings for people to play in. Feel free to use these in your game, campaign or as ways to spur on your own creativity and imagination!