[Three Hexes] All This Has Happened Before

Campaign: Common wisdom and conventional beliefs have flown out of the window with the discoveries made at "The Site" that indicate our ancestors were advanced technologically and possibly came from the stars! Nationalities are in an uproar; scholars, religious leaders and their followers are gathering; merchants are making a profit from tourists while local leaders jockey for importance to visiting celebrities; but the enigmatic artifacts and structures remain silent to their stories. In all the hubbub, the farmer's story of a strange light and disappearing cattle has gone unheard, for now...

Homebase (Hex 0) (0101): New Corvin - The narrow streets surrounding the Halls of Learning are choked with tourists, soldiers, mercenaries, merchants, scholars and rulers alike, all taking, arguing, planning. The grounds outside the small university city are overrun by tent cities, merchant caravans and convoys of military forces. The largest vault in the town has been set up as the storage site for artifacts from "The Site" but a quiet black market has set up in the tavern district, both guarded very carefully! 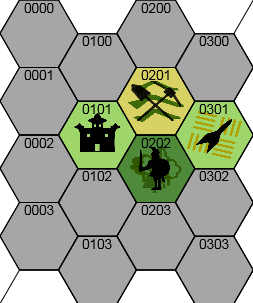 Location 1 (0201): "The Site" - The grasslands and three hills are surrounded by temporary fencing, stone faced guards and mercenaries. Inside the perimeter are hastily constructed tents and buildings covering the digs that have revealed structures, remains of of metallic vehicles and artifacts that seem to possess a power and intelligence all their own. Several small dig sites have been started by non-university groups well away from the official site, zealously guarded and watched by all and hotly debated among the competing groups as they scream at each other.

Location 2 (0202): Secret Site - This site in the woods has been discovered by the military forces of the area in cooperation with a scholar secretly in their pay. The structures uncovered from the earth resemble living quarters and some sort of machine that can communicate! The military is guarding this area zealously while the scholar attempts to translate the spoken words and written letters that the machine is producing.

Location 3 (0301): The Guardians - Farmer Widwood is nearly frantic in telling people about the strange object that suddenly appeared in the middle of his fields in the past ten days, a large silvery object with strange figures leaving and entering. The Guardians have returned, called by the activation of the artifacts and their concern about the misuse of them. They are uncertain how to proceed, reluctant to retrieve the artifacts or make their presence more widely know, but the military from the Secret Site have heard the Farmer's stories and are coming to investigate.
The 2003 re-imagining of Battlestar Galactica remains a touchstone in my life. For five years, my wife and I sat down in front of the DVR to watch the latest episode and see how badly the 49,000 survivors were screwed for that week. I personally LOVED the ending, but for almost a decade, I've had the "155,000 years later" story in my head. This picture melded an idea in my head and I needed to start writing that story... and this campaign starter is a result. You might also recognize one element if you're a Dragonriders of Pern series fan.

Whether you run this as fantasy, as modern sci-fi, as something else, I think the classic story of "our ancestors came from elsewhere" is awesome. After all, all this has happened before, and will happen again. (And if you don't believe me, read up on the origin story of the famous Empire of Petal Throne/Tekumel campaign!)
Every week, I will be posting "Three Hexes" - simple campaign starters to show that you don't need to do a lot to have interesting settings for people to play in. Feel free to use these in your game, campaign or as ways to spur on your own creativity and imagination!