On the 46th day of the Summer season, the 59th Year after The Doom, Marshal Shapman of Giant's Crossing sent his 2nd-in-command, Commander Meade, to Giant's Keep up-river with an important mission: stop the Bestials from their raids across the Foamflow River!

The Orcs and Goblyns, led by Warchief B'orzg, had taken over the abandoned Castle Ost and gathered a host of warriors, wolf and horse cavalry, ogres and a troll. Upon seeing the human host across the river, they gathered their warriors and bolt throwers and prepared to do battle.

Foremost in their thoughts was an obstacle that lay between the two armies - a legendary dragon by the name of Valdroan Contempio. This old dragon had noticed the raids by the Orcs and was drawn to the possibility of conflict and treasure. He made his lair in an old abandoned tower next to the river, which was between the two opposing forces! What to do about the dragon and each other? 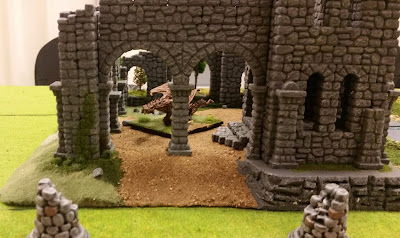 This was the opening scenario for a day-long Ral Partha Chaos Wars game at Little Wars 2018, which took place on April 28th, 2018. In three related sessions of three hours each, 13 gamers pushed metal and rolled dice to see who would be victorious in battle. It was great fun! A challenge for me to set up and referee, as well as manage the "mini-game" of the dragon and treasure, but I love a spectacle and this definitely was one!

The following slide show are pictures from the event - the after-action report follows. I will be rerunning the first session again at GameHoleCon in November, if you're interested in playing!

The Battle of the Dragon, Summer 49

The Orcs gathered up all of their treasure and sent their horse-mounted cavalry speeding up to Valdroan. Intrigued by the large amount of wealth and filled with blood-lust, the dragon agreed to destroy the mounted Human knights. Having secured an ally, B'orzg drew his forces back and waited for the Humans to cross the river.

As the Human forces approached the ford, Valdroan emerged from his keep! Fearsome deadly dragon-fire erupted from his jaws and engulfed the Human mounted knights in flame, killing them all! The Bestials called out taunts as the Humans reeled, but Commander Meade quickly recovered and sent out two fearsome creatures as well as poured catapult and ballista fire at the dragon. The dragon was slain!

The Bestials were dismayed at the defeat of the dragon, and began organizing their lines for an attack. Meanwhile, Meade sent his heavily armored footmen racing to the ruined tower and recovered the treasure as well as directing his other forces to cross the river to attack. The Orc and Human troops smashed into each other in a brief but bloody confrontation, then withdrew to recover.

Battle of the Ford, Summer 51
Having hastily hired on mercenaries with the treasures gained from the dragon's hoard, Commander Meade assembled his armies on the banks of the Foamflow River to attack the Bestials gathered on fields before Castle Ost. The Orc Warlord B'orzg summoned his troops as well, with whip lashes and loud horns.

Meade sent his forces across the river, both at the ford and at low points up and down river, while his catapult and ballista fired at the Bestials. First to fall was the fearsome troll, but in retaliation, the Orcs slew the Human Mage Ynorim who had followed behind the forces, assisting with his magic. The two armies clashed in battles on all sides.

The Orc Cavalry Leader, a bold warrior named Lorgum, called out to one of the Human leaders to a duel. The challenged accepted, the two fought and young Captain Williams was slain. Not satisfied with just one death, Lorgum called out Commander Meade to a duel as well! The two fought as their cavalry watched breathlessly. Sword and spear clashed, but at the end, Meade lay grievously wounded and insensate.

The Humans reeled from the loss but held on grimly as the Bestials continued their attack. Enraged, the Ranger Owen challenged the great Goblin warrior Pus and slew him. Soon after, human bow slew an Ogre sneaking through the ruined tower. Creatures and troops died, and one of the Orc ballista was smashed by the Human-controlled Rock Monster.

As the day drew on, the two sides had to retire to lick their wounds, having fought to a bloody draw.

Second Battle of the Ford, Summer 54
Major April, as ranking officer, took command of Giant's Keep and once again replaced losses from mercenaries, as well as hiring Ynorim's apprentice to assist her. Bloodied but buoyed by the battle, B'orzg gathered his forces for a final assault on the Humans. April assembled her remaining troops, including levies and a band of armored bowmen. "For Meade and Williams!" the humans cried out as they once again crossed the river.

This battle was not one of finesse, the two armies clashing in pitched battle. A fearsome "Rock Thug" creature destroyed the goblin wolf cavalry quickly, collapsing the Bestials' right flank. The humans destroyed the Orc cavalry and fought off the Goblyn horde, who dissolved in disarray from casualties. Undaunted by the losses, the warrior Lorgum called out to another Human leader - Captain Anya leading an infantry unit. She answered the challenge and although wounding the dour Orc leader, fell to his spear and blade.

That was the only victory for the Bestials', however, and they soon found their forces routed or defeated. Reluctantly, Warchief B'orzg withdrew his forces and returned to Castle Ost, with the Humans having eked out a minor victory over their foes!

After 9 hours of gaming, a solid 12 hour game day, I was wiped out, but this was so much fun! It's events and battles like this that make all the hard work painting minis and building terrain worth it. To have these battles, and then they provide lore for my campaign world - so worth it! I could not have written a more interesting story!

I did not expect Valdroan to fall like he did, nor did I expect draws in the first two battles. However, the dice and players told the story. The final battle was very back and forth, but in the end, the Humans had eliminated three units to the Orcs eliminating none. This gave the humans a minor victory and thus the lore of my campaign is now set for that battle. We'll see if this bloody nose gives the Orcs pause on their intentions towards the Duchy of Pisces -- as my wargame campaign in that strife-wracked area continues!
Labels: Chaos Wars Chronicles of Etinerra campaign Little Wars