A few days ago, I asked for feedback on the Three Hexes series and wow, I got some great feedback! I really appreciated hearing how you are taking the concept and ideas and making them your own.

One reader, Matt Ruane, even went so far as to share his campaign starter with me, based off the Three Hexes idea and gave me permission to share it. Here's what Matt said and his campaign. Thanks for sharing!

I've included the map, and the player's version of the locales on the map. Admittedly it is more like 7 hexes, but it works for me and them.

So far, they have briefly explored their home, Green Harbor, and gone to The Strike/The Temple of the Titan's Sword, where three priests maintain the shrine, while a bunch of creepy platinum haired children (i.e. Village/Children of the Damned) are the mysterious psychic defenders.

Real moral dilemma in a post-apocalyptic world that fears magic and they just witnessed the children wipe out dozens of raiding mutants with their psychic powers.

Anyway, all of this was inspired by the three hex posts, and it is making for a very clean start to my campaign, now into its second session. By the time they explore all of the nearby region, it won't be until well into the fall.

LOCATIONS NEAR GREEN HARBOR
Each hex is 24 miles, or one day’s full travel. 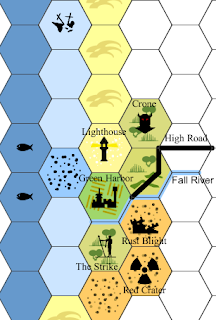 EASTERN RIDGE: This is directly northeast of the city, and is a landscape of well-picked over ruins as well as the remnants of the High Road. Some orchards and farmland can be found in the area, tended by hardy farmers and ranchers. Most of the honey that flows into Green Harbor comes from the western side of the foothills.

FALL RIVER: Heading roughly east northeast from Green Harbor, the Fall River heads along the edges of the Eastern Ridge and the Rust Blight. Occasionally, after strong storms, the river turns a bright neon green as it flows into the ocean. It all clears in a day or two without any seemingly long lasting harm being done.

HIGH ROAD: The remnants of an ancient highway, it is maintained near Green Harbor, but past the Eastern Ridge, the road stretches compass straight to the east. It is not maintained very well in the ridge or beyond, but merchants still find it the simplest way to travel through the wastelands.

LIGHTHOUSE: Promotory Light, old ruined lighthouse complex is located about 12 miles up the coast north of Green Harbor. It is said to light up at night after storms have recharged the structure. Instead of driving ships from the ragged coastline, many fishermen claim they seem to be drawn to the shoals and rocks when the light shines forth.

The High Council, however, seeks to restore the lighthouse properly. However, it is overridden by a band of “nekkers” who have taken over the ruins. Cleaning them out (or driving them off) will certainly earn you a reward from the High Council.

RED CRATER: The site of a nuclear detonation has twisted the irradiated badlands into a breeding ground for the dreaded Trogs, mutated progeny of the humans caught in the blast. They cultivate strange fungi that have unpredictable, but many times useful properties and guard them as if they were religious artifacts. The market for the fungi which do not grow outside the Red Crater, is high, but so is the cost of retrieving them.

RUST BLIGHT: Well sorting out the local scavenger tribes near a patch of the Rust Blight might be more your scale. Just head southeast of the city for half a day and you’ll certainly run into their outlying scouts and patrols. Good luck. However, the ruins still are a lucrative place to find trade-tech and occasionally there are said to be pristine caches of Before Time tech waiting to be uncovered for the lucky.

THE CRONE: Well if you don’t care about your life or limb, dealing with Grusha the Death Crone might be the fastest way to become famous (though it’s the odds on favorite way to become dead). She lives in the scrublands about two days northeast of Green Harbor.


THE STRIKE: This is the place where the Titan's Sword, a massive blade of a magical material, sits embedded in the stone, surrounded by a small crater. Over the years a small church and a few buildings have been built up around the Strike, and a temple dug underground where the faint glow of the magical material can be seen. Some still come down here to establish their vows as one of the Faithful, others to take in the essence of the Blade to supposedly increase their martial prowess, though the visits have become more rare these days.