The Duchy of Pisces, attacked and cut off from the rest of the Kingdom by the fearsome Bestials, is counterattacking! Duchess Childress has marched her loyal forces and reinforcements towards the fallen stronghold of Arcpoint, while the neighboring Southron Duchy reels from a series of vicious battles leaving their forces weakened.

The final battle of Year 58 occurred on the 70th day of Winter, as the aggressive orc war-chief Yagomog attacked the Army of Tel Anon, which had moved up the road to cover the Hashan Army’s move back. Both army’s left flanks were crushed, and Yagomog himself knocked out during the fight, but he managed to survive and escape capture! The orcs were forced to retreat and it took the harsh whip of their War Chief to reorganize them.

The humans shift their Knights around to keep from being flanked, while the Bestials bring a Mountain Ogre Behemoth with them. 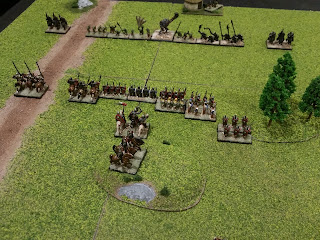 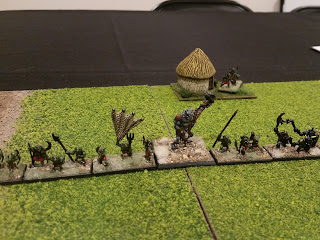 The fighting is deadly as the Orc Shooters wreak havoc on the Humans left flank. The humans crush the Bestials' right flank and win the day by recoil destroying the General's Warband. Yagomog survived and escaped capture. 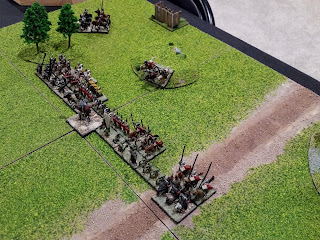 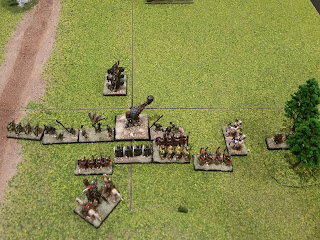 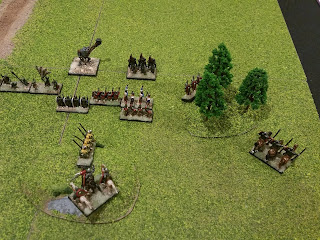 On the 6th day of Spring, forces of the Southron 2nd Regulars probed the area of the Tuluk Ruins and were driven away, nearly wiped out and soundly defeated. Master Wizard Emrol and Colonel Hallan Gerche, the commander, were killed in the battle.

This battle was a Chaos Wars game at GaryCon IX, 2017. It just took me over a year for Game Time in my campaign world to catch up to battles already fought! Just another example of how I use EVERYTHING in my campaign. Players in my tabletop campaign are traveling to Tuluk, where they will have to deal with the repercussions of this battle's results. 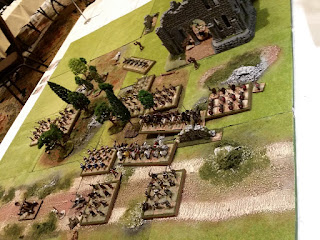 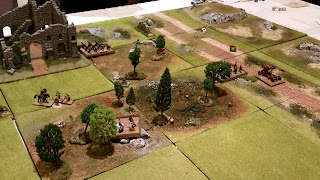 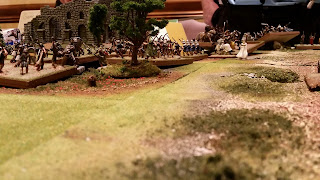 To the south, Duchess Childress organized her armies into a line to approach Arcpoint from the east. She reached out to the Armies that had fled the Duchy of Dawn and declared her authority over them, giving them orders to reinforce the borders between Pisces and Dawn at key points.

To the west, the Southron 23rd Regulars rebuilt from reserves and replacements, but were forced to remain close to the city to protect it from the Orcs. Lorumbu, the Orc War King, gathered and reorganized his forces, determined to hold off the attacking humans and keep the fortress of Arcpoint and its strategic importance to the area.

On the 26th day of Spring, Marshal Humil (of Reach) and Marshal Vasey (of Ancturin) accepted the Duchess’s authority and orders. However, Marshals Hanequin and Arter of Dawn 1st and 2nd Armies refused to obey her. Vasey and Humil appealed to the two holdouts, but they again refused. Vasey and Humil ordered the two commanders arrested. The Dawn Armies complied; Hanequin and Arter were relieved of command and their 2nds, Avis Celata and Tullius Sumner, were promoted to become Marshals. They agreed with the orders. The two prisoners will await trial by the Duchess in the future.

The Bestial army commanded by Orc War Chief Mahkurz attacked the Army of Tel Anon on Spring 29, while the Human army traveled on the forest road leading to Arcpoint. Mahkurz, inept in his command, organized his armies poorly and never was able to gain any real advantage over the humans. Marshal Gordon’s forces fought very well and crushed the Orcs, even capturing the Orc War Chief himself! Mahkurz’s army broke and fled the field. 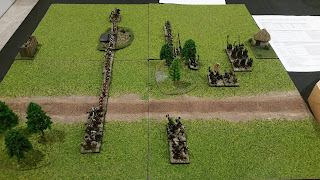 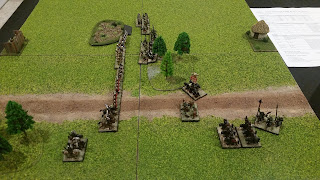 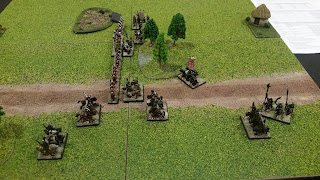 I've established a good rhythm in using Berthier to manage the details of movement and messaging, while using my Wargames Campaign Record document to keep track of the details. I've even started tracking losses, casualties and recovery, using ideas from The Solo Wargaming Guide and Advanced Dungeons & Dragons! The Record itself is organized based on ideas from Charles Grant's "Wargames Campaign" which is a great read!

If you'd like to see what it looks like, here's a link to my Spring 59 AD Campaign Record document.

I've also created a "Calculate Losses" spreadsheet, which simplifies the calculations of losses, walking wounded, lightly wounded and seriously wounded. This all based on how I define units and some flags. Hm. This all might be another blog post.

Or is all this too nerdy? :)
Labels: Chronicles of Etinerra campaign wargames