Campaign: A vessel from the stars has landed in what appears to be idyllic farmlands, tended by what appears to be humans, accompanied by races that are human-like but have strange features, such as shortness, full beards or pointed ears. Out of this vessel comes humans, dressed in odd clothing, bearing odd devices and weapons and speaking in a strange tongue to a box that speaks in Common language. It has been long said that the strange priests of the mountains forbade contact with any visitors from the stars, but people are quickly overcoming their fear and jockeying for position to profit from these explorers who are seeking long-lost places and asking many questions, including some about those same strange mountain priests!

Homebase (Hex 0) (0101): City of Inur  - A small city located near the borderlands to the Wilds, serving as the hub of the breadbasket of the Kingdom of Margmin. All of the races coexist peacefully in Inur, working and trading closely with each other, as Marmin's Directorate keeping a close eye for any illegal activities (or threats to the Overlord). The taverns are full of wagging tongues at the appearance of the strangers from the stars, and they wonder when the Directorate will move in force against these strange beings. 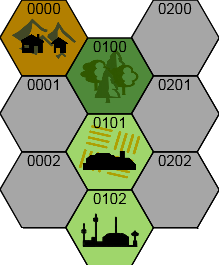 Location 1 (0000): Windlords' Demense  - The Windlord nobles and commoners make their home in the steep mountains of Nelfig Heights led by the stalwart King Tilvon. Their beautiful and delicate aeries, filled with highly sought arts, and the masterful jewelry that the Windlords wear, is a counterpoint to the reckless and violent way that they conduct warfare on their enemies. The enigmatic monks of the Highest Peak temple allow only those who are brought by the Windlords to have an audience in their single Tower of Audience.

Location 2 (0100): Helleborus Forest - The peaceful Hippileans live in the Helleborus, making their homes in the clearings and dales where they can mix their potent concoctions and tell the future to those who bring enough treasure to earn an audience. The Hippileans have never posed a threat to any, including Margim, and have even earned a bit of protection from Syltuk, who regularly purchases large quantities of their most powerful elixers. The Helleborus itself is a confusing place, peaceful and yet deadly with the creatures of myth that roam it.

Location 3 (0102): Xeksvici - The garish Golden City is the capitol and throne of Overlord Margmin, who has conquered much of the land and looks with lust to those places he has not yet overthrown. The city (and surrounding towns) are filled with his enchanted constructs, known as the Directorate, led by Underlord Alka, his daughter. Not quite as grandiose, but just as visible are the many towers of Margmin's vizier/mage Syltuk, which always seem to be the focus of much activity and fear, surrounded by the poorest of inhabitants that often vanish from their hovels.


The influences from Buck Rogers/Flash Gordon stories are obvious, but in coming up with this, I thought to myself "What if the PCs were playing the parts of the villagers and aliens visited by humans?" Whether you choose to run this campaign as a sci-fi game encountering a fantasy world, a fantasy world dealing with a party from the stars, or you want to mix it up as a swords & rayguns campaign, I hope you can find something to like here!