[Three Hexes] The World of Below

Campaign: The Old Ones, they said that once we came from above, that we ruled the Abovebeyond and even something called "the skyz", but that we sinned and failed and we had to live down here, in the Below. Nobody knows for sure, though, and we can't ask them anymore, because the Old Ones, the Guardians, the machines that helped to repair the scrubs and filters, they all stopped working. The witches, they keep the things going as best they can, with spells and scrap and maybe luck, but now we have to explore more, find more and even commit the greatest sin, go as high as we can back up to the forbidden Abovebeyond.

Homebase (Hex 0) (0100): Amy's Falls - This is a small village of buildings built of rock and shroma stalks, located next to the eponymous waterfall that descends deep into a Dark Hole. The giant filters and water-claimers serve as the center of the village, with the three witches who monitor the filters acting as de-facto leaders. The demise of the Old Ones and Guardians from the Lelziznorac has led to something of a scrappers gold rush to the ruins, allowing locals to make a mint on selling supplies and guide services. 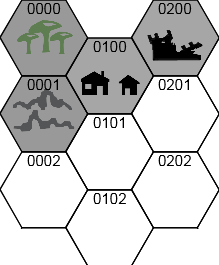 Location 1 (0000): Shroma Forest - Thick shromas tower to the high rocky ceilings in a series of enormous caverns, while the floor is almost impassible with smaller shromas, yellers, purple yellers and some of the man-eating orange suckers. Shromas are the resource of choice when available, so the pickers risk the many dangerous creatures and obstacles to harvesting the stalks and caps for food, textiles and building materials. They laugh at the mystics' warnings that the shromas may be living and coordinating their own defenses, although this particular forest has become much more dangerous lately after a particularly rich harvest.

Location 2 (0001): Erc Wastes - The Wastes are a broken series of tunnels, dead ends, holes leading down to Dark Places and small, hidden caverns full of stalagmites and stalactites. The Ercs that live here are fierce in their worship and guardianship of a huge ladder made out of a strange metal, leading up to, some whisper, a portal to the Abovebeyond. As the pressure grows to find new sources of materials, or even to possibly explore the Abovebeyond, the Wastes are being explored more and more, leading to a potential war with the xenophobic Ercs!

Location 3 (0200): Lelziznorac - Once a stronghold, now a silent, crumbling tomb of Old Ones and Guardians that live no more. The many traps, mysterious devices and magical oddities make exploring very dangerous, but the profit to be gained by recovering scrap is too irresistible, and there is usually at least one scag-team in the ruins. Recently, a team found an open hatch to a tunnel leading down to a Dark Place, but they did not live to pass that knowledge on, their torn and bloodless bodies serving as a warning that something does not like being disturbed!