I am running several wargames campaign in my Etinerra world, which hosts all of my AD&D/D&D games. It's been a fun way to explore my world, set some action into it that the players experience on different levels, and to allow me to play as well. The vast majority of my wargaming is solo play, with some convention/event games thrown in.

My wargame campaign rules (which are available here, if you're curious) are based primarily on two books: Tony Bath's Setting Up a Wargames Campaign and The Solo Wargaming Guide by William Silvester. They've been invaluable in my progress. I've also grabbed bits here and there, such as a set of rules for Solo DBA/HOTT. (De Bellis Antiquitatis, Hordes of the Things)

(I should note that my rules are constantly in flux, so if you grab a copy, sometimes I update them quite a bit, especially if I'm in a bit of playing, like I am now.)

Using HOTT/DBA to resolve contacts/conflicts means I can do several battles in a weekend's time, which is what happened this past weekend.

The situation: The orcs of the Southern Sithasten Mountains - the Bloody Axe tribe, struck a hammerblow against the Duchies of Pisces and Dawn in Summer/Fall of 58AD. In Pisces, they lay siege to the great fortress of Arcpoint and sacked it. As a result, they controlled the only access from Pisces to the rest of the kingdom, a narrow landbridge between the Sithastens and the sea. As the orcs also have conquered the vast majority of the former Duchy of Dawn to the north, it looked like Pisces might be next to be conquered. The Duchess Childress has summoned her armies and reserves and marched forward to war!

The Southron Duchy, in answer to a plea from the Duchess, have marched the Army of Orleans to attack the orcs from the west, while the forces of Pisces (four armies and reserves) have marched from the east. Unfortunately, the Orcs intercepted couriers and learned of these plans, and resolved to attack first! An initial probe by the Hashan Army against the orcs to the east was repulsed, which embolded the warchief Graolg to attack! To the west, the orcs commanded by Murzag attacked the Army of Orleans in and around their earthworks.

(Note: the way I compose my armies is with regular (professional or well trained) and militia (levies, town guards, less trained) regiments. The leader is rated by their class and reliability - A is best, D is worst, 1 is most reliable, 4 is near treasonous).

On the 33rd day of Winter, the Orc Armies commanded by Murzag attacked the Army of Orleans at their encampment to the west of the border town of Westgold. The Southrons, commanded by Marshal Beauregard Cautus, struggled to organize into a line with the woods hemming them in, while Murzag’s warriors pushed quickly through the woods. (The humans could not roll good PIPs for the opening bounds!) 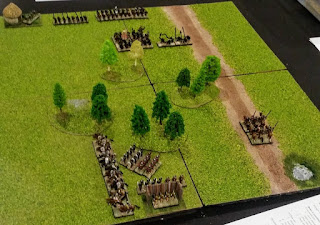 Cautus’s Knights smashed into the orcs right flank, hoping to score a decisive breakthrough. The orcs fell before their charges and one regiment of knights dashed forward and sacked the Orc camp! However, the Orc spears and warbands hammered again and again at the human spearmen and blade troops, while holding off the remaining knights. The threat of hordes from the Orc’s left flank kept the Orleans cavalry occupied on the right. 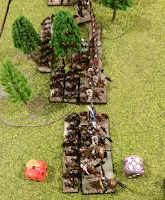 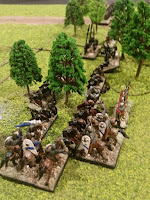 The human’s center crumbled from the assault and soon, only half of the Orleans Army remained. (Three human elements were destroyed in one bound. Blades vs. Warbands is a dangerous combination! The humans could not roll well to save their lives, and the results showed, soon enough.)

Cautus commanded a retreat into the woods to the northwest. It was only his command presence and their training that gave the Southrons a chance to regroup! Meanwhile, the Orcs retreated as well, with Murzag forced to use his lash and his subchiefs to reorganize the Bestials!

In my wargames rules, I have worked out rules for determining loss of forces after a battle, morale of forces after battle and if any special outcomes occur. I had made outcomes for if the Orcs lose or Humans lose, 3 each - based on leader's class, if applicable. In this case, the best outcome for the Humans losing was to retreat and reroup. Not all battles have an outcome like this, but since this was the first encounter with the Southrons, I wanted to inject some interesting elements into the results. With the orcs army type being militia, and the % of losses, a retreat was called for.)

Marshal Belkin, commander of the Hashan Army, knew without a shadow of a doubt that the Orcs would be attacking soon. Sure enough, on the morning of the 34th day of Winter, picket riders raced back to tell him that Graolg's Army was marching towards the humans' camp! Belkin's commands were quickly followed as the humans lined up in preparation. The hoarse cries of the Bestials could be heard through the trees as the Orcs approached! 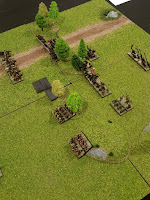 Belkin and his Knights took to the road, to prevent the Orc spear from rushing down and flanking him. Meanwhile, the Human and Orc archers moved towards the hill to the north, although the Orcs were very cautious in their movements, almost defensive!

(The disposition of the orcs rolled (per the solo DBA rules) was indeed defensive, so they attempted to get a decent line going. The Orc shooters on their left flank kept the Human shooters and approaching Human spear busy, giving the Orc hordes and warbands time to come up.)

The Knights smashed into the Orc spear and in a stunning victory, Belkin and his personal guard slew the Orc warlord Graolg and a great number of his spear! To cap the quick turn of events, the Hashan archers fell half of the Orc archers, reducing their effectiveness for the rest of the battle. 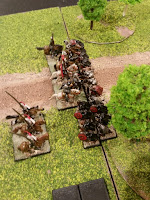 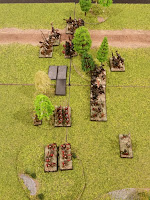 The Orcs fought on gamely. The Orcs left flank became an archer's duel, with the Human archers forcing the Orc archers back, but never far enough to allow the Human spearmen to flank the Orc Hordes. The remaining Orc spear could not destroy the Hashan Knights, but neither could the humans force the spear back.

It was the warbands of Hashan villagers and townsfolk, and the Hashan spear, that forced the Orc center to crumble. With their warlord gone, the Orcs found their berserk rage dissolving and they fled in disarray! 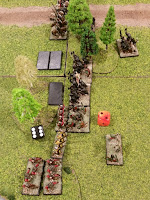 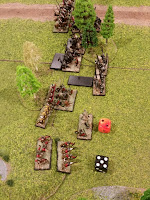 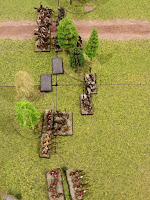 (In my rules, a fleeing army is normally dissolved as a fighting unit. However, in my campaign, orcs are relentless and fearsome. If a leader is able to get the army to succeed on a morale check within perhaps 3 turns, then they stop fleeing. Another morale check puts them back into the fight! However, Graolg's successor, Warlord Uramba, is a class D2. That means that with the army being of type Militia, their morale value is 2. A class D leader is inept, so there's a +1 penalty to the roll. Uramba has to roll a 1 on d6 to be equal to the morale value and succeed!)
Labels: Chronicles of Etinerra campaign HOTT wargames