Campaign: The agaricosia (giant mushroom) forests and inhabitants of Nethelem had lived in peace for generations, but then the Sky Wardens came and laid waste to the towns, villages and farms, leaving behind ruin as they ravaged the lands and stole the children to serve as their slaves. The technology they used was so advanced that it seemed magic in nature, and it quickly overcame the natural and druidic defenses of the Nethelemese. They've learned quickly and have struck back, however, forming a pact with the rocs of the Kangragen Mountains, digging underground burrows and engaging in sudden attacks, dropping rocks, burning acids and stealing the very tools that the Wardens use against them.

Homebase (Hex 0) (0001): Tholron - Only ruins remain of the village carved into and among the agaricosia, but the resilient Nethelemese have begun to rebuild, far more carefully and mostly underground. Travelers and merchants entering and leaving move about mainly at night, when the Wardens are not able to see among the agaricosian fog clouds. Mining has become a new source of wealth for the Tholrons, and they have adopted some of the Warden technology into the new weapons they are forging below the roots of the forest. 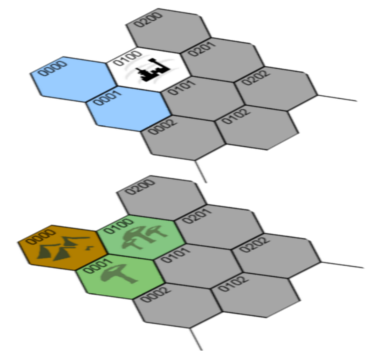 Location 1 (0000): Revelfalls Mountains - The mountains to the north are home to the Rocs, the fearsome flying creatures that the Nethelemese have begun using for their counterinsurgency against the Wardens. Wild gnolls who inhabit the dark, rocky valleys fight fiercely against the rebel camps that have sprung up in the slopes and cracks of this unforgiving range. The Wardens have learned to their dismay that their magics and technology do not fare well among the strange rocks and difficult terrain, giving the Nethelem a place to gather in strength.

Location 2 (0100 - Ground): The Grieve - Once a beautiful forest of agaricosia, this area has seen terrible fighting between the Wardens above and the Nethelemese and is now a no-man's land of charred, broken stalks, ruins of once-thriving villages and many Warden arcane-weavers seeking out signs of life to extinguish. Small groups of Nethelem remain, out of stubborness, fear, or worse: collaboration and submission to the Sky City above. The devastation is so great that the once benign myconidians have begun to fight, casting strange druidic spells and engaging in a savagery against the Wardens that is unmatched by the other insurgents.

Location 3 (0100 - Sky): Sky City (Tan-k-on-z-echin) - Floating on thick, solid clouds, the gleaming white sky city of the Wardens masks the horror found within. Behind the fifty foot high walls, lined with strange machines that spit arrows and darts are found the squat ugly domes of the Warden pods, where the enslaved Nethelemese serve the grotesque conquerors in menial tasks and with their lives as the subjects of obscene experiments and rituals. The many magics and technologies of the Wardens seem to run on their own, powered by a force that is found deep within the city, a target of the frequent and sometimes successful raids by the Nethelemese on their fierce roc-mounts.