Campaign: Mother Earth was far kinder to humanity than it needed to be, when The Change happened, but the scope of the 21st Century's devastation on the biosphere was far worse than any scientist could have imagined. When the Russia-Sino-American War over resources escalated, the biological and nuclear horrors that each country unleashed combined to wreak havoc and change far beyond what evolution could have provided. Beaten back to a scavenging existence across much of the planet, mankind struggles to survive in this new era.

Homebase (Hex 0) (0101): Ace's Crossing is a ramshackle collection of huts, shacks and buildings constructed out of the rubble of  a town, who's only remnant of The Time Before is half of a metal sign saying "ACE H". Traders come here to exchange goods and gossip, while adventure seekers quiz the refugees and nomads that come through, on their way to the promised land of "Somewhere Else." Recently, the newly formed town militia fought off a raid by the strange zombies from the military base to the northeast, the weapons and armor fetching high prices among those who have enough to trade for them. 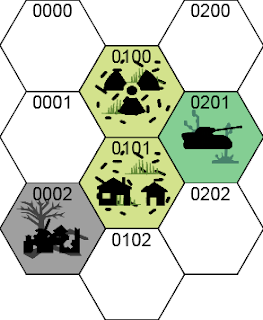 Location 1 (0002): The City - If it wasn't for the giant insects that scuttle among the rubble of this city, it would be prime scavenging for tools, weapons and equipment that could be fixed and sold for high prices. The ravenous creatures make any expedition a calculus in how many men lost, how far one can get into the silent, vegetation covered ruins and if enough can be found. The last two scavenging parties have never returned, leaving many to think the insects finally are too numerous, or more ominously, too organized.

Location 2 (0100): The Radzone - The site of a nuclear detonation has twisted the irradiated grasslands into a breeding ground for the dreaded trogs, mutated progeny of the humans caught in the blast. They cultivate strange grains that have unpredictable, but many times useful properties and guard them as if they were religious artifacts. The market for the grains, which do not grow outside the Radzone, is high, but so is the cost of retrieving them.

Location 3 (0201): Fort Fens - The Fens are a thick swamp, with water from the Radzone making the area brim with mutated plants and zombies. It is whispered that mutated humans - elves - have taken over the military fort deep within the Fens and have started outfitting the zombies with armor and the more aware/cunning zombies with weapons -- for an unknown purpose. This has made the occasional scavenging of the fort a very dangerous prospect as well as giving rise to Zombie Raids on Ace's Crossing.