Campaign: Where there was once peace and prosperity, now there is war and famine, and all wonder if the cloud of evil that has lain over the Great Yellow Palace will ever be lifted. Fierce ogres and brutish giants attack without mercy, and what they do not take is quickly seized by the many warlords and mercenaries that prey on the helpless. The priests and seers all believe that a great warrior-mage must arise to help take back the lands, but they do not know where to look, and they fear that their curiosity will attract the wrath of those who don't want to see a savior come.

Homebase (Hex 0) (0101): Imori - The village beggar begs all who enter to listen to his story, of the lost city of Bukudo, once destroyed by the Merchants of the White Armor, whose sewers are now the birth place of "Tetsu no Kodomo", the savior of the Lands. He pleads with those who shop in the market square or who drink from the village well to seek out the Iron Child, for he is trapped below and will die unless he comes out into the Sun. The villagers, normally a quiet and tolerant folk, have begun to fear that his ramblings might attract an undesirable element, and have begun to look for ways to make him be quiet - perhaps permanently - lest he attract the attention of the nearby Ogres of the Red Rock! 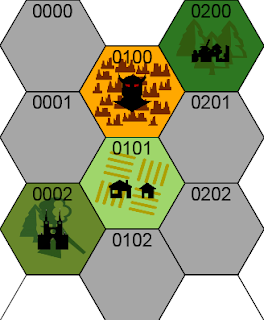 Location 1 (0002): The Mountain of the Blue Clouds - This temple has fallen on hard times and the priests within are little more than beggars, scraping an existence among the forests of the mountain. They maintain their vigil in the falling timbers of the once proud Blue Cloud school, hoping that the fabled warrior-mage will come to them for the training they'll need to face the troubles of the land. The forests are now home to an unwelcome tribe of goblins who have cast a greedy eye at the temple for whatever treasures may lie within.

Location 2 (0100): Ogres of the Red Rock - The fearsome, blue-tattooed ogres and the feral giants of the Red Rock regularly prey on travelers that may wander into the badlands, but they have recently found easy pickings on the surrounding villages a day or two away from their tribal grounds. It is said by some village elders that the ghosts of past battles between ancient ogres, giants and the long-dead warriors of Bukudo haunt the rocks and gullies, driving the ogres to madness. It matters little to the dead travelers and explorers, whose bones mark a chilling boundary of a place where few want to go.

Location 3 (0000): Bukudo - The forests have mostly reclaimed the ruins of the city of Bukudo, once a thriving religious and military center for these lands, but long since abandoned since the dark clouds descended on the Great Yellow Palace to the east. The walls and great temples were destroyed by catapult, ram and fire, leaving only stone walls and wreckage behind. Bukudo's sewers and wells, once the domain of thieves and outcasts, now serves as a hidden shrine to the hope that a savior will be born to the old priests who maintain their vigil. A baby, delivered in mysterious circumstances to these dark tunnels, has awakened hope within the priests, and dark forces that now silently glide through the ruins, keeping the baby underground.