I am running a slow solo wargame campaign in my Etinerra world of Orcs vs. Humans. I am starting to run this campaign with the Berthier Campaign Manager software and when there are contacts/conflicts, I resolve them with solo games using HOTT, One Hour Wargames or Chaos Wars.

It had been almost a year since I'd run HOTT, and I wanted to try it using a set of rules I'd come across that takes the new version of DBA (DeBellis Antiquatis) 3.0 and melds it with the existing HOTT (Hordes of the Things) 2.x rules.

The biggest change, from my perspective, is that the language of the underlying DBA game (which HOTT is based on) is much easier to understand, the game now uses base width (15mm and 25/28mm figures use a different, but standard width of the base holding the figures representing an element) as the measuring tool, and the types of forces and options have some interesting facets.

It was a bit of an adjustment to go back to HOTT/DBA after playing Chaos Wars so much, but I had a lot of fun. Made a TON of mistakes, including not seeing a quirky placement of a "recoil while flanked leads to destroyed element" rule that I struggled with, but that's part of the fun -- learning and improving.

I wanted to share a couple of tools that I use to make my solo games a lot easier.

First, the Berthier Campaign tool that I've mentioned before about a year ago. It has honestly been about a year since I had a chance to put down minis in a solo game and play it out. I reacquainted myself with this wonderful tool and started using it to plot movements, issue orders to armies and see what happens. Before this, I had been tracking movement and orders via a hex map hosted on Roll20 as a type of online "map board", and a Google Docs document tracking orders and intent. 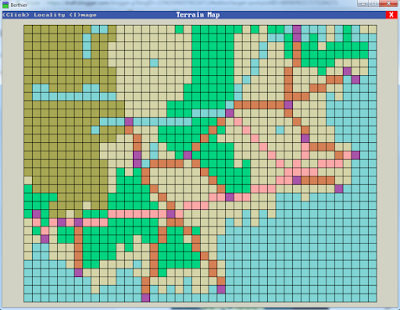 Now, I am starting to put most of that into Berthier! I am still using the Google Doc to track some basic overall info, but things like movement orders, force composition and the like, I'm putting into Berthier more and more. I'm also using the "message" feature of Berthier to send messages to and from the various armies like couriers... and it takes their movement rates into account as well as a percent chance the messenger might not make it! That's freakin' cool. It allows me to "role play" that an army down the road a few days might not get the message that their buddies on the front were just attacked - send reinforcements!

Another tool that I'm using when I go to the HOTT game is an army card. I use this approach in my Chaos Wars games - each troop, creature, leader, artillery gets a card that has the information that a player needs in order to run that unit. It makes it a lot easier than fumbling with charts and tables.

To that end, I'm doing very similar with my HOTT armies. Here are the two cards I made for my Orc and Human armies. 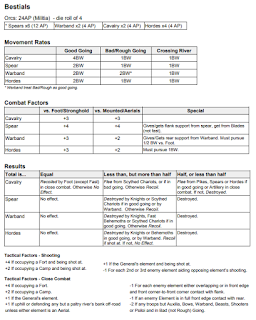 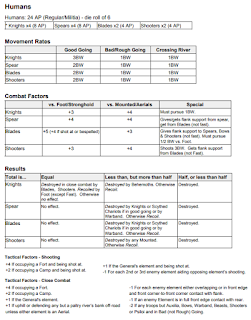 This helped to speed the game up a lot, as I just looked at the information on these cards. Everything I needed was there. I only turned to the rules when I had to look up something. That happened a lot with (re)learning HOTT/DBA all over again. This game seemed to take forever - 33 bounds before the winner emerged!

I made use of some of my new 15mm scatter terrain that I just made. Next game, I'll be using four home-made terrain tiles that I've been creating to go with my Pedion Battlefield Modular Terrain.

I'm going to be doing a lot more solo wargaming, now that I've got a bit of momentum back in my wargaming routine.

Here's a question for you all, those of you who stayed awake to the end of this... what do you like to see in Action Reports/Game Recaps? Short, quick, to the point - or turn-by-turn play?