What else is going with me? Gaming and more gaming!

It's been three months since my post about "Just Three Hexes" and since I started my podcast - The Dungeon Master's Handbook. It probably seems like my blog has just turned into only those for content, but there's been a lot going on with my gaming.

With GaryCon coming up -- and my usual ZOMG last minute prep -- I've been busy with things non-gaming and gaming.


The AD&D campaign has taken a turn most unexpected, and taken me into a new direction! For 9 years, we've stuck to the West Marches style of play - a homebase, go out, do stuff, come back same session. It's worked really well.. except my world is HUGE! Roughly the landmass of Russia... which makes traveling very far in a six hour session somewhat problematic.

The Heroes of my campaign have learned that they need to find some ancient information among the "Wild Men" tribes that are nowhere near where they live. They also need to recover three swords of legend, also which are nowhere near where they live. So, they've gone on a road trip... and so has the campaign. They've just traveled to a new Duchy, something not done before.

This means that I'm "just in time" creating like a mofo. Where I had a comfortable key and map, now I'm having to create whole new areas, NPCs, information on what is going on.

The VERY COOL thing is that part of what they're going to encounter is due to a Chaos Wars scenario that I ran at last year's Little Wars. So... frakkin'... cool! So I have somewhat of a head start. At least with their destination.

I'm putting all my tools to use, including "broad brush strokes" and the like - but I'm definitely on my toes now because the path that these guys are taking is varied. It's forcing me to create in a "set piece" approach and use them where applicable, modifying when I throw them out. In programming terms, I have some classes that will do the things based on parameters passed to the constructor at run time.

Very new for me, and a helluva lotta fun.


The Ultima campaign... *sigh* I've had to let that one go. I had some wonderful folks who were very enthusiastic, but then the reality of running an online game during the week, trying to shoehorn it in everyone's schedule just became too difficult to get a good rhythm going. There was interest in doing it as a play-by-post, but I am running into bandwidth issues right now and I'm not sure I can make it work.

Which is a shame... the players got to interact with some old school Ultima CRPG elements, including Lord British and STRANGE WINDS! Hee Hee...


I'm still painting the minis and I even completed a small terrain piece that is decoration only. I started it at GenCon in 2017, and finally finished it. It's called "Dwemer Autumn" and it's inspired by the autumn feel of Riften in the video game Skyrim, and the Dwemer (dwarves) who left random bits of their architecture all over the place. 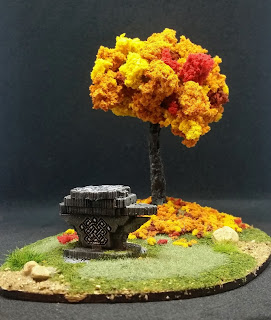 As a note about the Three Hexes and podcast, I am REALLY surprised, flattered and inspired by the feedback I'm getting from y'all. I had no idea what to expect with the podcast, if people would hate my voice (I'm still uncomfortable listening to me run my own suck about things...) or if the content would not be well received, but it seems to be listened to by a nice group of subscribers.

So thank you for that!

The Three Hexes are also being well received, and I am really starting to get the hang of letting my imagination go on these. I have some ideas on how to expand them in the future. I have to admit, Dyson Logos is a bit of inspiration for those ideas...

So how y'all doing? Who will I see at GaryCon?
Labels: Chronicles of Etinerra campaign miniatures podcast Sosaria campaign Three Hexes