Campaign: It doesn't matter what gods you pray to, how strong your armies and walls are, how crafty and skilled your wizards are, in the end, The Great Storm rules over all. A vast cyclone of lighting, rain, hail, wind and unimaginable fury, it moves at random, it cannot be stopped and it leaves devastation and ruin in its wake. Nations and cities have learned to harden themselves against The Storm, and to consider the question of providing help, taking advantage of, or ignoring your neighbors when they are hit and left battered.

Homebase (Hex 0) (0101): The city of Hales Corner sits where the nation of Justilia borders the nations of Calleston and Mattechi. The city is newly hardened against The Storm that recently swung close, with squat concrete buildings, flood canals and protected farms-wagons dominating the hills and grasslands of this region. The city leaders have mustered militia and rescue supplies, awaiting a decision by the Great Noble Council as to what Justilia's response to the destruction of Nagishville to north will be. 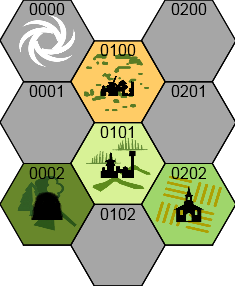 Location 1 (0002): The Green Mountains, thickly forested and old, are a largely shunned area unless travel or curiosity brings someone to the region. A tribe of quaggoths lives here, largely tolerated and undisturbed as long as the creatures remain peaceful. A scholarly expedition to search for ancient ruins has recently left Hales Corner and made their way to the edges of the verge.

Location 2 (0100):  The border city of Nagishville, in the nation of Calleston has been destroyed by a recent visit from The Storm, which left very little in the way of intact structures behind. The normally peaceful, conservative farmers and city dwellers are in turmoil and fear over the heavy loss of life and homes. City leaders have heard rumors that Justilia and/or Mattechi may attack, and they are fearful that the complete destruction, lack of supplies and no militias available leaves them with few options.

Location 3 (0202):  The theocratic rulers of Mattachi, normally loathe to deal with anything to do with affairs outside their borders, are eyeing the destruction of Nagishville with great interest. Their walled and zealously protected city of Lord's Blessing is bursting at the seams with the influx of armies and militias, preparing to march to war, with Hales Corner most likely a target of invasion as well! Visitors to the city, used to normally suffering through a day of indoctrination , attempted conversion and very few freedoms save to trade, have seen themselves possibly conscripted into the service of the nation.
Notes - During GaryCon IX (2017), I played the old 1979 boardgame of Dune. One of the interesting features of that game was an unpredictable storm that could wreak havoc on your plans. While I don't recall reading about these storms in the novel, I liked the concept that such a force of nature could change the game with the roll of the dice. In this Three Hex campaign, I would have the storms roll through the various hexes based on dice for direction and how many hexes it moved through. Of course, the beauty of Three Hexes is that YOU get to decide how this will work. Have fun!
Every week, I will be posting "Three Hexes" - simple campaign starters to show that you don't need to do a lot to have interesting settings for people to play in. Feel free to use these in your game, campaign or as ways to spur on your own creativity and imagination!