[Three Hexes] The World of the Chosen

Campaign: Although legends say differently, common wisdom says that it has always been so - the Chosen in Unlife live in the cities, while humans, orcs and goblins live in the Wretched Lands. Small towns of the various races exist in an uneasy balance, with war as likely as periods of peace and trade. The only sure thing is The Choosing, where those who are selected by the Arbiters are sent to the cities to become of the Chosen, so that the Armies of the Dead do not emerge to wipe out what remains of the forsaken Living.

Homebase (Hex 0) (0001):  Sendelac is an old town, built on top of the ruins of generations before. Perched on the slopes of the harsh Martina Mountains, close to the Deadlands to the east, the humans and elves eke out an existence based on trade, raids and luck. Fortune can be found in delving into the depths of the ruins below, but the city elders warn against awakening Those that should be left Sleeping. 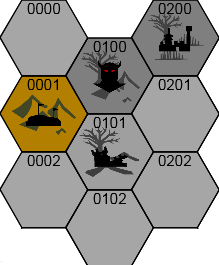 Location 1 (0100): Orc camps dot the mountains and rotted woods of this part of the Deadlands, serving as homes for the nomadic orc tribes who war and trade among the wandering lesser Chosen and unnatural creatures living in caves and holes.  The orcs do not suffer the intrusion of others lightly, save for the time of The Choosing, which they also participate in, both in supplying their own Chosen to Azbulok as well as guarding the trains of Living Chosen from outside their demesne. It is rumored that the orcs horde a Great Secret deep within the mountains, one that they are even willing to dare the anger of Azbulok to keep.

Location 2 (0101): Goblin burrows are found beneath the ruins that dot the lands, places that are whispered to be evidence of once-great Living beings buried deep. The wily Goblins will permit Living to enter the shunned burrows and tunnels in exchange for a cut of the loot, though it is just as likely that they will try to rob anyone who does find things of value! The sullen hills and mournful forests enveloping the ruins are full of lesser Chosen, perhaps scouts from Azbulok, perhaps for some reason not allowed in the city anymore.

Location 3 (0200): Azbulok is a city inhabited by those in Unlife - both the Greater Chosen and the more common Chosen - they who were once the imperfect humans, orcs and goblins. None know who built Azbulok; those who've delved too deeply into the ruins beneath Sendelac or the nearby Goblin burrows claim there is evidence that once Man and Elf created the great city. Today, it is a dark citadel of death and darkness, the center of the Deadlands and full of mystery and strange creations that seem otherworldly to those who are brave or foolish enough to risk entering as a forsaken Living one.