Most of you probably know that GaryCon X 2018 was this past weekend. I've put up a ton of pics on Google Plus, as well as recorded a podcast about lessons learned, but I wanted to share a bit of the fun things that happened this weekend, as well as a realization about what draws me into a game as an Role Player and DM.

I always enjoy playing Kevin Cabai's Chainmail games. Kevin is a student of Tolkein's Middle Earth and every game he runs from that world is a treat. He also understands Chainmail very well and has streamlined the rules in such a way that it is very easy to play, but there is a lot of fun things you can do within his games.

In this scenario, it was re-enacting the flight of Beren and Luthien from Morgoth's prison in Angband. Cacharoth, the wolf-monster had bitten off Beren's hand that clutched the Simaril from Morgoth's iron crown and was driven mad by the stone in his belly. (If you want to know more about Beren/Luthien, this video is fantastic!) 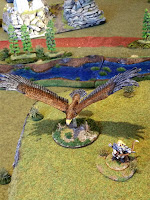 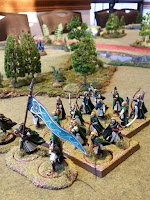 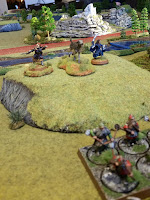 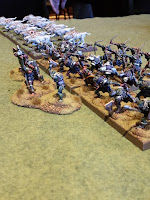 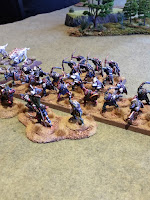 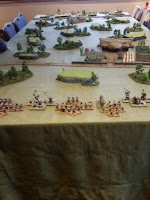 The various orc/troll forces and elf/dwarf forces battered each other for awhile. I had a small part of the forces of Weal - the Elf Hero Mablung and a small force. I took one side of the area between Doriath (the southern edge of the board) and Angband (northern edge of the board), alongside a company of dwarfs. Thingol, the Elf Superhero King, and a large force of elves/dwarfs took the other.

The forces of Woe tracked Beren/Luthien/Huan to my side and I ended up being a speed-bump to give them time to flee. Mablung was felled by a hideous troll. I wish that my sacrifice of elves and hero was key, but the real battle was between Beren, Luthien, Thingol and Carcharoth. In the end, all were killed save Thingol and he was heartbroken to have lost his beloved daughter to The Beast.

It was a wonderful game and Kevin always makes it so interesting.

My Saturday morning game "Return to Zenopus's Tower" was canceled - the DM had a family member pass away. Jay Sharpe, a great guy who's played in my games in the past, was very kind in allowing me to jump into his Swords & Wizardry "Buried" game. This must be a game that he's run before, as he even has special "Buried" dice printed up for the game, and a mechanic for using this special orange d6 for rerolls.

The scenario and dungeon itself were very enjoyable! Given the title, you can figure how we were involved in media res into the game. Jay does a great job with pulling us all in. I also had a wonderful banter going with another player, I as a suspicious dwarf thief, he as a less suspicious human cleric. 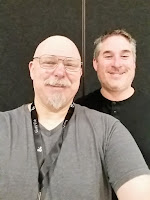 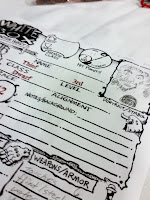 We completely missed a room with gear, we successfully fought a wight (with the cleric's player and I cooperating to allow him to use my Buried dice to reroll successfully), fought off a mage with skeletons, avoided a giant earth worm, burned out a room of spiders (I think Jay was surprised when I burned the webs before entering the room) and had a fantastic time!

If you get a chance to play in Jay's game, I highly recommend it!

I was a bit nervous, but excited about playing this game. The last time I played a space/sci-fi game as a player - at Winter War in 2010 - it didn't go well at all. I quickly found out that I had nothing to worry about - Christoper Miller (or Captain Joy) ran a great game!

His system used GURPs. I can't tell you what of GURPS he was using (he did say he did not use the latest Star Trek adaptation for GURPs, if I'm remember that correctly). He made it very easy to pick up and play, and there were enough people experienced at the rules system that it went very well. I snagged the Command section character (Kirk Jr!), filled in the choices and away we went. 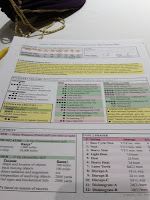 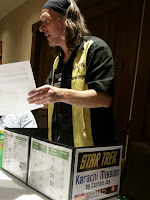 The scenario took place in the TOS-era, right after the events of the episode "Balance of Terror." We were traveling back to the Neutral Zone to investigate a 45 year lost ship that had been found. We fought figures cloaked like Predators and resembling Nosferatu (Remans!) We watched the Enterprise avoid the attack of a Romulan War Bird. We found nanites aboard the dead ship! I came up with a crazy idea of using the ancient seeker nuclear missiles aboard to blind/disable the Romulan ship so the Enterprise could beam us aboard. It worked! So freaking cool!

I really enjoyed this game and had a huge smile the entire walk back to my room, having felt like I was right in a Star Trek episode. Well done, Captain Joy!

Legends of Wargaming: Battle of the Moathouse by Paul Stormberg (assisted by Kevin Maurice)

I was very much looking forward to this game, having read the original 2006 battle report on Dragonsfoot with great interest. Here was a chance to play some Chainmail in a place I was very familiar with, having played the module T1 - Village of Hommlet as a teenager.

I will start with the positives - the scenario was very well thought out, the Order of Battle sheets for each side were very well documented and a lot of great info. The terrain was fantastic! I loved the modular moathouse and how the roofs lifted and inside was exactly as the T1 module map showed! 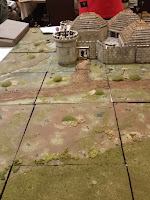 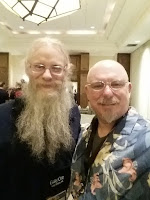 Kevin's assistance in figuring out how to do artillery in Chainmail was invaluable and he was such a kind-hearted assistant. I really enjoyed getting to chat with him. We, the players, all eventually settled on a gentleman's agreement on how to proceed, as none of us felt very comfortable with the rules. The forces of Weal had the assistance of someone who'd played the scenario before, and that helped us to manage to get across the river and to the moathouse before time ran out. We did not lose any heroes and managed to get some kills on both sides as well as getting a feel for how to do hero/superhero actions alongside troop vs. troop actions in Chainmail - as well as lots and lots of artillery.

The not-so-positive part - Paul was very distracted with folks who were visiting the convention - apparently this was due to something about his D&D documentary. As such, we all felt bad when we had to interrupt with rules questions and places where we needed his guidance, but it was necessary to find him and then ask. He would willingly stop and help us, but then go back to the discussions. I think the game progressed much more slowly due to this and there was a feeling of being left on our own. I did have a chance to talk to Paul later about that and gave him the honest feedback, which he was very apologetic and gracious about.

I would happily play this again, but I think I would hope it would happen at a time when Paul will have less distractions.

I was looking forward to this game as well, having heard about the fun and shenanigans that can be had at one of Ernie's games. I don't have a lot to say about this game, unfortunately. I don't know if I was just tired, if it was the dungeon or what, but you ever have one of those games where you just don't "feel it" or you feel about 38 degrees out of phase with everything? That was me. I was playing a human mage.

The character sheets were well done, Ernie's assistant was really cool and it was nice to pick up on some description techniques - that's always a place where I struggle - how to give mapping dimensions. The dungeon itself... I don't know. I'll just leave it at that.

I did realize one thing in reflecting on the various games in contrast - it's hard for me to sit back and just be a pedestrian in a game. I like a dynamic game, where everyone is involved, where the scenario and environment are compelling and evocative. I like to help out and feel like I'm part of making a difference, or fulfilling the mission, or exploring the unknown. I'm choosy about what I play, and I like to DM the way I like to play. I want people to walk away from my games having felt like they got their money's worth. I talk more about this on my podcast, so I won't repeat it here.

Well, this post has gone long enough, so I will close it with this -- the energy at GaryCon X was great! I watched, ran and participated in a lot of great gaming!

The hotel itself was laid out differently, and there was a lot of walking, but I personally didn't mind. The vendor mart was fun as always, and the Ral Partha booth got a few of my quatloos. I was hoping to see Game Science there, but they weren't. I'll have to wait till next time for my Ugly Dice set, I guess.