Campaign: In the morning of Man, the god/desses ruled over their cities and lands in the manner of each deity and their personality. The gods vie for control of the other's lands and people, for the more people that worship a particular god/dess, the more powerful he/she becomes. There is much mystery and danger within these lands, from the various creatures and demons, to the mysterious strange ruins that the elder races - the lugurin (dwarfs) and the libirin (elves) - left behind.

Homebase (Hex 0) (0101):  Missura - This large village, it's mud brick buildings rebuilt four times in the last two generations, lies on a stretch of disputed land between the three cities. Within a short walk's distance, the gleaming white bones of a libirin building chime in the wind, perhaps to attract devils and demons, perhaps to chase them away. The farms are plentiful, trade is easy to come by, most people are hospitable and the only dangers come at night or when the gods are angry with the traveler. 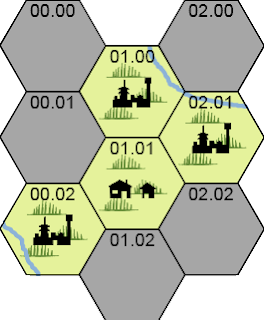 Location 1 (0002): Zalbat - The gorgeous canals of Zalbat are for the veneration of the capricious and temperamental Goddess of Rain. The city is full of thieves, mercenaries and river sailors, drawn by the lure of the goddess's pleasure, and able to weather the storms of her anger, much like the city itself which has been built of durable stone and made to resist the many rainstorms. Traders and visitors to Zalbat will be encouraged to visit the many small temples built for where people can give gifts, sacrifices and make prayers to the Goddess to appease her.

Location 2 (0100): Kira - The plodding, straight-forward, no-nonsense, no humor people of Kira echo the disposition and personality of their god of grain, when they are not being controlled by Kira directly as he forces them to follow his will. The squat, ugly buildings and walls of the city, and the people that fill them, greet the traveler and trader equally with suspicion and ill temper until mollified with obedience and sacrifices to Kira at the Great Central Temple. The surrounding villages and farms are similar in nature, as the god maintains a very careful watch on all who live and move through his lands.

Location 3 (0201): Gimma - This city's many warehouses and market squares give testament to the bustling commerce that the god of trade encourages. Gimma's many fat idols lazily sit above the lintels of the stores and warehouses full of goods. The lugal of Gimma keeps the god's avatar busy with wine, treasure and lecherous activities, while he sends out many to find even more riches for himself. Although the people of Zalbat look to Gimma as a ripe fruit for picking, the god and the armies of Gimma are almost unmatched in their unpredictability on the battlefield; the god preferring that his men and women do the strategy and fighting to bring him back loot.

I have a long, unrequited love with Mesopotamia and D&D. Back in 2010, I wrote a dungeon adventure called "The Tomb of Hul-Kur-a-sag" based on Mesopotamian motifs, intending on publishing it. I never did, it would have failed the Bryce-test in a heart-beat, as well as not delivering what I wanted. I still think of running a Mesopotamian campaign - one based closely on the alternative history established by Harry Turtledove in his book "Between The Rivers." This campaign starter is directly influenced by his book and the situation within.
Every week, I will be posting "Three Hexes" - simple campaign starters to show that you don't need to do a lot to have interesting settings for people to play in. Feel free to use these in your game, campaign or as ways to spur on your own creativity and imagination!