One of my blog readers and player in my AD&D campaign has made his own Three Hexes campaign starter! Derek "Doc" Daniels shared this with me and gave me permission to share it with you! I think it's pretty cool to see how he ran with the idea.
Campaign: In the kingdom of Barrastos, the people respect and fear the gods, for their power and fickle nature are well known. The king enforces the peace among the religious, political, and various other factions of the kingdom with the help of the fearsome, lance-bearing Vennglory Knights and the powerful sorcerers known as the Blades of the Black. The Lords and Ladies of the land are constantly manipulating people and events, vying for power and influence… and so are the gods, some say.

Homebase (Hex 0) (01.01): Tam Vanir seaport is a city in decline, despite the best efforts of the priests to the gods of community, prosperity, and good fortune . Crime and disease are on the rise, and its taverns are frequented by smugglers and pirates. The corrupt local government seems to care little about improving matters, and merchants have little choice but to employ small armies to protect any goods they wish to transport. 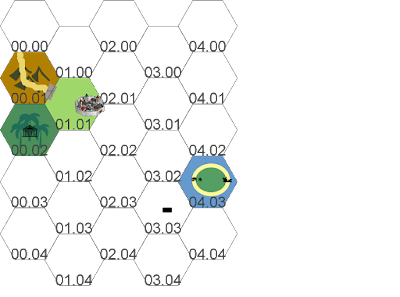 Location 1 (04.03): Off of the southeast coast of Tam Vanir lies Twin Sabre Island, home and sanctuary to many a pirate crew. The cove on the west end of the island sees the most activity, although most ships not hoisting a pirate flag steer clear. The ruins of an old empire fortress lie on the rocky east end of the island, and it is said to be haunted by the ghosts of the imperial soldiers that fell there.

Location 2 (00.01): Past the outlying farms that surround Tam Vanir, a mountain range to the northwest separates the Crawfurd barony from the rest of the mainland. There is a single pass through the mountains, with an ancient wall and gate built in the time of the old empire still stands, guarding the entrance. The wall is usually sparsely manned with only a few soldiers and priests to the god of guardianship, but there are rumors of creatures appearing near the pass from up in the mountains, and Count Crawfurd may soon call for a force to drive them away if they become disruptive to trade.

Location 3 (00.02): Southwest of Tam Vanir, the land becomes overrun with dense vegetation and treacherous patches of quicksand. Deep within the coastal jungle lies the remains of a temple to the goddess of justice, which was once a popular visitation spot before it was abandoned and lost to the jungle. If the old stories are to be believed, somewhere in the temple lies the shield of Karabela, Champion of Justice.
This is not free for use, Copyright 2018 to Derek Daniels, all rights are reserved.
Labels: Three Hexes