Campaign: In the Age of Elves, the Monster King descended from the heavens and wreaked destruction across all of the known lands, leaving death and ruin in its wake. The Elves defeated the Beast and buried him deep underground in a place that was forgotten as the Ages progressed. Three generations ago, in the Second Age of Men, the Monster King awoke again and has emerged from His Lair several times, gaining strength as he ranges further and further.

Homebase (Hex 0) (0101): Kamella's Fastness - This former trading and mining town is now a fortress, built in the solid rock of the Way Hills and protecting the thousands of citizens that live in it. The Monster King has traveled twice across the Fastness, but it has held against his flame and magicks. There is still trade and mining happening, but the town also sees a fair amount of adventurers intent on exploring the Monster King's lair for rare Elvish artifacts, and to recover items for sages intent on discerning the Beast's secrets. 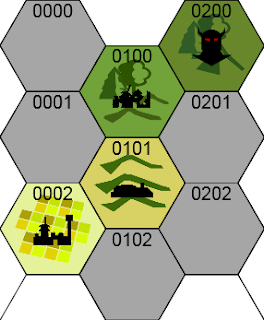 Location 1 (0002): Fladias - This prosperous agricultural city has not yet come under attack by the Monster King, but it is in a near civil war between those who wish to raise an army to kill The Beast and those who wish to worship it as a new vengeful god. The town guard is ill-equipped to deal with the violence, and the Town Elders have appealed to the local Lord to send troops to help quell the unrest. In the meantime, vigilante groups have balkanized the city into small neighborhoods, and a black market has sprung up for those wishing to smuggle goods to continue trade.

Location 2 (0100): Toinar - Rubble and ruins marks the location of this once beautiful mountain city, nestled in a forested valley that now consists of burnt grass, charred stumps and little natural life left. Those who survived the ravages of the Monster King have taken to a strange religious practice; once a year, they deliver a sacrifice to The Beast's lair in hopes that it will be appeased and never return to ravage their lands again. It has not yet returned to this particular place; despite that, the inhabitants have done little to rebuild and live in a self-inflicted misery.

Location 3 (0202): The Lair - Deep within the Gaubain Mountains lies a once forgotten Elven complex that was raised over the defeated Beast's lair millenia ago. The recent reawakening of the Monster King has reduced the above and below-ground structures to ruin, but much still remains of mysterious artifacts and ancient writing that some say could be the key to defeating The Beast. Approaching is dangerous, for the King has attracted the attention of many creatures, some of myth, some of more fearsome reality, and they guard the deep cavern from which the King may emerge if It is disturbed!