Campaign: The history of Man changed on August 3rd, 2193, when gravity waves, gamma bursts and flashes of light announced the formation of The Rip; a tear in time/space almost nine light years away. The science mankind learned from the rip rewrote the books on physics and allowed them to discover Faster-Than-Light travel. What mankind didn't know was that the Rip was deliberate, an artifact of The Alien Invasion to come.

Homebase (Hex 0) (0100):  The Sol System is the birthplace and home of mankind. With the discovery of the mathematics behind FTL travel, humans are slowly venturing outside their cradle, making small jumps to the edge of the Sol system and out into interstellar space. Within the Sol System, Mars, Earth's Moon and Titan have all seen colonies established. The Kuiper Belt and Asteroid Belt are home to prospectors and corporations seeking to cash in on the new "gold rush" of exotic minerals and materials. 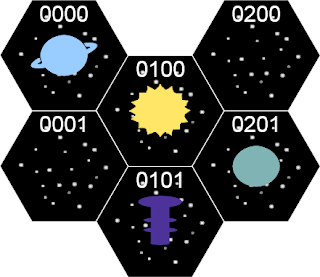 Lalande 21185 (0000): The red dwarf star of Lalande 21185 (aka Gliese 411) hosts one large gas giant and several smaller planets, six of which are moons around Lalande Planet A. Unknown to mankind and the Aliens is the existence of a species that lives in the upper atmosphere of Planet A. These creatures are telepathic and can form hive minds to solve problems or for defense. They lack technology as they have no need for such - living solely to think, learn and experience life.

Luyten 726-8 A (0101): This system is a beach-head for the Aliens in their invasion of our local region of space through The Rip. They have established autonomous facilities to produce the machines needed for them to wage war. The Luyten system also hosts dead rocky worlds, blasted by its sun, but rich in exotic minerals and materials needed for advanced technology.

Alpha Centauri (0201): The Alpha Centauri system was one of the most widely studied systems in the Twenty Third century, being the closest with possible Earth-like planets in the Habitable Zone. FTL probes have detected signs of intelligent life! Expeditions from Earth are still being planned to travel to that system to explore and meet the inhabitants, not knowing of the fierce battle that rages between the various Centaurii species and the Aliens from the Rip.