Campaign: It is said by the myth-tellers that Ronark'a was once a single land, but The Great Cataclysm that sundered heaven and earth is what created the shattered islands. During the Shattering, almost every island was given a "heart", an affinity to some power or god/goddess or some ability. Life has evolved since then to create a balance and where once was chaos has now settled in The Ways.

Homebase (Hex 0) (0101):  Ashnana - this island is known as the "Market Island" for it's great tents of commerce and gold mines within the steep mountains. It is one of the few neutral islands where many different races, castes and classes mingle in relative peace, watched carefully by the Merchants' Army. The high cliffs of the island are dotted with holes for the mines or the hanging platforms where all live and trade. 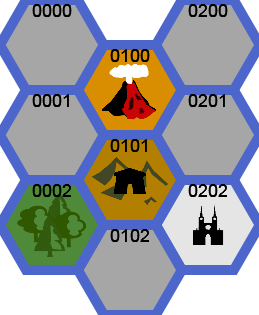 Location 1 (0002): Nareshta - The forest island is the abode of the eponymous goddess. A fickle and protective deity, her clerics and druids welcome only those who show affinity to serving her. The yearly harvest of the Great Tree Seeds brings visitors from across the islands, as this is the only place where the seeds may be obtained to be planted elsewhere.

Location 2 (0100): Herefax - A lava-spitting volcano dominates the landscape of this hellish island, birthplace to the marauding pirate Orcs and their bitter enemies, the equally vicious Dwarfs. The small towns and harbors that ring around the edge of the island are dangerous places to visit, but the source of some of the finest weapons and armors found on the islands.

Location 3 (0202): Zyx - This mist-shrouded island is home to the elven lore-mages, and they grant entry to those few who have the gift of sorcery. Only in the port of Qij may non-mages live and work, serving the mages. The Dragons of Zyx roam the skies of Ronark'a, bringing back their treasure to their wehers somewhere on or in the island.