John has been playing in my Etinerra campaign for a few years now. He's a smart, funny player who loves to write his adventure log entries from the singular viewpoint of his littleling (halfling) character Balto.

I award 10% XP bonus to players who do these writeups - as they help inform other players who might not have made it to the game, and they set the recorded history of our games. I have adventure logs going back 9 years and its wonderful to go back and read them. 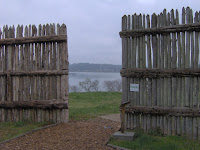 I met several of my fellow adventurers at the fort on the site of the ruined Wayfarer’s Inn. I was filled with foreboding – I never really had regained my strength since the day the chaos clouds welled up over Irecia and to the South. The woods to either side gave me solace, though I still grieved the scar in the Dark Woods made by the orcs.

Belaldur had been here before us, and he had ridden out to Irecia alone. Before he left, he instructed the captain of the guard to pass out his possessions to his friends. And here we were, most of us, and too late to save his bacon.

To me, he passed along his map to a trove we had discovered together and looted separately. Boraen, Fergus, Ragar, Pyrea all received bequests. Grel and Mazlor, too – as they were not with us, I offered to take theirs to them – but the captain said he had a solemn duty to place these items directly in the hands of Beladur’s heirs. Talvi looked sad; I thought we all feared we’d never see that seafarer again
.

Those of us there – the above plus Boraen’s clansman Einar, Beth, Wikton, and Willie and Josef split up the spoils from our last outing over a fine dinner of stewed rat. I passed the gauntlets to Pyrea and told her I thought they would provide her some defense.


The captain asked us to go south and investigate the noises that kept coming from that way: excavating or tunneling, occasionally explosions. We’d wanted to check out the chaos cloud from that direction, so readily assented. Beth and Wikton were outfitted with horses and gear. 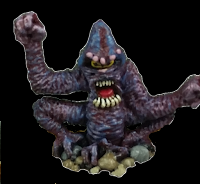 We rode out of the woods along the Irecian Road, then cut S/SE on a direct approach to the pillar of purple smoke. Pyrea and I soon heard the sounds; to me, it was as though something was ripping out of the earth. In the distance, I saw bursts of rocks and dirt fountaining up.

We dismounted and Beth, Ragar, Boraen, Wikton and I scouted forward across the ground between pits. Ragar almost fell into a tunnel as the dirt gave way beneath her. Wikton was surprised by a weird creature, all tentacles and teeth – no doubt what had been tunneling here!

As Wikton scrambled back, bleeding, the rear guard moved in. Beth and Ragar shot at it, but the arrows glanced off the beast’s scaly hide. We charged, and tentacles around us. Borean and I did some damage; still Wikton and Ragar were the true heroes. Borean tried to pull the monster from the ground but only managed to rip its head off. The carcass was full of ichor, the whole body some odd fiber-and-flesh combination. Boraen used some of our oil to light the body on fire, and we saw wisps of smoke rise from the ground in a 30-yard circle. The smell was horrific. 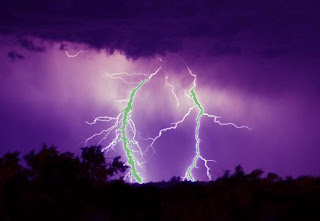 We paused to bind wounds and heal up, then resumed our ride south – we had to get away from that stench, at least, before we could stomach second breakfast! By midday, we came across the bodies of all sorts of animals and birds, crushed and torn. And more of those pits. I could see purple and green lightning from the pillar of cloud to the south.


And then Einar cried out – an animal appeared next to him and bleated. Ragar and Talvi shared an astonished look, and all our horses began bucking. We calmed them as the bleater moved away. Boraen tossed it a sausage and it blinked out and suddenly was right by Boraen, attacking. Waste of sausage, that!

I cast faerie fire, and Beth shot at the animal but nearly hit me. Her second shot was on the mark, though. Boraen and Einar hit the animal; before it could blink away again, Pyrea rocked it with magic missiles to finally put it down. Again, we did what we could to cure the wounds of our company. And again we rode on towards the pillar of chaos clouds.

As we came closer to the clouds, fog obscured our sight. Looming out of the mist were some ruined walls, surrounding a fog-shrouded hill. Lightning played across the hilltop. We left our horses with Willie; Boraen and Talvi and I took the lead as the rest of us moved towards the hill, where we could just make out the shape of a battered building.

As I passed the ruined walls, I felt observed and heard in my mind, “What have we here? A littling, a human, and friends behind?” Boraen must also have heard this, as he called out, “Who are you?”

The reply came: “Do you come to serve?” We both declared, “No!” The lightning crashed down as we heard an angry shrieking in our heads.

Talvi was sent back to guard the horses with Willie, and our party began to close up. The conversation continued, punctuated by lightning strikes: “Perhaps you are wise – but such a shame to be on the losing side. All of you (here I realized our discussion was heard by the whole party) can serve me now, or wait until later – but you will serve me.” I felt everyone recoil as unanimously we refused. “Such a waste,”it purred, “but I would expect this from the ‘Heroes of the Duchy.’” 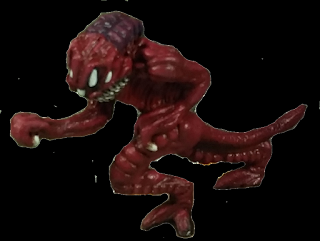 A beast, many-eyed and with a huge mouth full of sharp teeth, charged out from the hillside. I tried to call lightning down on it – yet this was no natural storm, but one of chaos. I drop to my knees, head swimming, and pass out, feeling the Master’s amusement.

I woke in Josef’s arms – he had carried me from the battlefield. Someone had carried Einar off, too – but none of the party had perished, even though there had been at least three monsters and their Master directing them from the hillside. We rode hard for a couple hours, made camp and changed bandages.

On our way along the Irecian Road the next day, we heard an insistent cawing, and saw birds circling at a distance. They were nearer than I thought, though – their great size tricked me. We came upon a very large raven trapped in what looked like birdlime oozing from the carcass of a dead dog. Not birdlime, though – this was the same chaos ooze as at the monastery. Many ravens of the same size, and one larger, circled around overhead.


The largest bird, Shrea, asked us to help. “Walkers,” she said, “Something came out of this dog we hunted. It burns my wing. It has trapped my son.”

Boraen used his 10-foot pole to push the bird away from the goo, but it stretched and stayed with the bird. Boraen then tried to burn the ooze, but it will not ignite – and the ooze reached for him, pitted and spalls his armor. Finally, he used a troll hand, which spalled and healed a few times. The bird could not be saved and Shrea begged Boraen to put her son out of his misery. He did, and commended the raven’s soul to Meesha.

Boraen looked at the troll hand, very fragile it had become. Then he and Willie and Josef roped off the area around the ooze, set caution signs on it. Shrea told us her flock’s story, how the orcs and the clouds of chaos had driven them from their home in the mountains, and how scarce food was. They’d been reluctant to hunt the odd-acting dogs, but had had no food for days.

Einar’s horse was given to the flock to eat, but before she joined them, she conversed with Boraen and Fergus and Wikton. Vanir and Meesha and Almun and Tangadorin were all siblings, she said, and one other god, too. I am reluctant to indulge in religious frivolity = look how it has weakened the humans in this struggle – but Almun the wanderer was a great and wise man. If his family was as wise and powerful, well might humans have thought them divine. Humans are easy to fool.

Shrea also told Boraen to seek his people south of the river, where they have fled. Boraen told her of the settlement at Jakar’s Rest, and gave her a note and a bracelet to prove he has sent her. But Shrea could tell us little more – not on the dwarven mines, the elf with a sword that was broken, the Master, the Black Riders. A little more on Irecia – the clouds are darkest there.

We rode through to Ennonia, where I introduced Beth to Ward, and had a private chat with him about the treasure map. I went on to Jakar’s Rest, where the ravens had recently arrived. Turgon said Meesha’s name was on the wind, and three more of Boraen’s clan arrived to defend the village. Grim talk around the fire on our next steps, everyone is sure we have at most a year to push back the Master and his chaos. 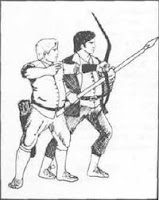 I yearn for the orchard and inn and the simple days of my childhood, or even the rough and tumble time under my uncle’s roof. I would love to protect just my little patch of ground, my circle, my forest, against the encroaching war. But duty calls; I fear I have much more to defend.

On the plus side, I have two men-at-arms sent from Carbaugh’s Keep. Carbaugh asks me to train the two littlings, keep them from getting killed, send them back in a couple of seasons. I’ll meet them in the morning, see what they can do. But first some meditation, a bedtime snack, and some sleep.