The party has gone from four to three now, as Erik had to bow out due to schedule. Nonetheless, the remaining players pressed on. The party now consists of:


We picked up right where we left off, with the players being marched before Lord British to be questioned as they were "strangers." Apparently, Those In Charge did not believe that the players were from "North of Oregon." 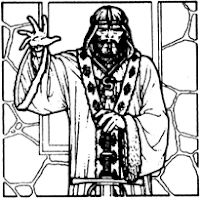 They were escorted by the big, beefy, brawny Town Guards that we all know and love through town and up to Lord British's castle. Once before Lord British, the party was questioned about who they were and where they were from. They told an incredible story of being from another place, another world -- to a few titters and chuckles. Lord British thanked them for their selfless service and called upon all who were there to see the players as a good example. He then announced that he was taking the players to see the "Oracle" where she could use her powers to determine who the Strangers were. 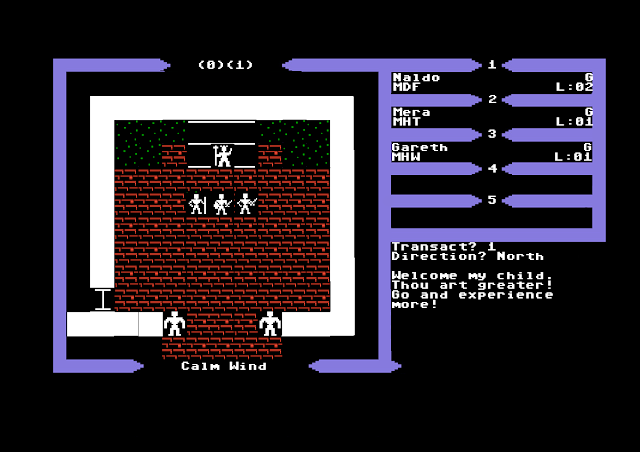 They were taken to a small room, but nobody else was in the room except the three PCs and Lord British. He turned to them and said:

"Before you speak, I must ask... how goes the Great War?"

"What war are you talking about?" Derek replied, confused.

"The Great War... the Jerries. The London Blitz. The bombings... you know... the war in Europe. Has Britain survived?"

It dawned on the players then... Lord British was from Earth too!

The players were told an incredible story. Lord British had been in a building in London that was hit by a German bomb during an air raid. He woke up to find himself in Sosaria. He was sixteen at the time. He was taken in by a King Wolfgang, who raised him like a son. Eventually, Lord British took the throne and has ruled since... for nearly seventy years!

The players found out that there are other Strangers in Sosaria like British and themselves - Shamino, Blackthorn, Rondorin, Menthric and Iolo. They all seem to have come from Earth's past, and they have been friends. Strangers apparently have powers and abilities beyond the vast majority of Sosarians, as well as the ability to help other Strangers reach even higher potential. To demonstrate this, Lord British performed a ritual that opened up new abilities and possibilities to the players - Gareth/Michael discovered the ability of magic, Derek found himself understanding how to be a better fighter and Fuzzy felt himself more nimble and knowledgeable. (They all hit second level.)

Beyond that, British told them a fantastic story of how Mondain, probably another Stranger, but from the future, attempted to ursurp Wolfgang and dominate Sosaria. British believes that Mondain is attempting to figure out how to get back to his time, as well as indulging his cruel sadism on the good folks of the lands. The six Strangers had previously defeated him, but Mondain has returned. British also fears that Mondain is behind the disappearance of the Oracle! If anyone would know of answers to how the PCs might get back, it would be her.

The players are currently spending some time acclimating to being in a fantasy land with magic and death! They are deciding whether or not to help British by investigating the disappearance of the Oracle.
I do have openings for three more players! We play on Roll20 (using Discord for audio) every Tuesday evenings from 7:00pm to 8:30pm (Central). The players said they like the short game length and are enjoying a different sort of experience -- playing as "real people" waking up in a Strange Land -- think of the D&D Cartoon or the "Guardians of the Flame" book series, for example.
Labels: Siege Perilous Sosaria campaign