My D&D Weekend: Dolly Parton and Save vs. Death

I ran two D&D games this weekend and had memorable moments from both that were just too cool not to share. 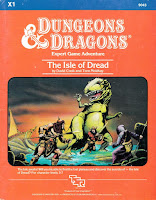 On Friday night, I ran an old school module - X1 Isle of Dread for a group of guys who played only 5th edition. I ran a bastardized simplified version of B/X, so basically D&D in my head. Pregens were chosen and the players really got a kick out of my old 30 and 40 year old figures. One of the players decided his character was a woman, a cleric and she looked like Dolly Parton. Remember this for later...

I always start these one shots off with a bang, so in this case the players were shipwrecked on an island with their gear and a strange letter/map. Once they used terrain to get an idea of where they were at, they began following the coastline to find villages and this "wall."

They made their way through a rakasta/phanaton encounter, found the villages and proceeded to try to figure out what to do next. They decided to help the villages with the raiders and wanted to set off in boats. The islanders warned them against sailing along the coastline because the "Deep One" that lurked in the middle of the most straight-forward path. Going around the island of the "burning mountain" would take too long. There was a smaller island beyond the burning mountain, but "we cannot reach it before the sun sets and that would be dangerous!"

The player playing the Dolly Parton cleric looks at his spell sheet and asks if he can modify "bless" to work on the boats to provide them enough good speed and fortune to reach the safe small island.

"Sure." I replied. "In order for that to work, though, your cleric has to sing praises to her goddess for the entire voyage."

"No, you don't understand. YOU have to sing for the next ten minutes. Dolly Parton songs. It can't be Nine To Five."

So for the next ten minutes, he sang "Two Doors Down", "Yellow Roses", "Travelin Thru", "Jolene" ... the rest of the players and I were howling in laughter! It was glorious. The PCs arrived at the island, and the cleric was hailed for having brought glory to his goddess - the Great Dolly Parton!


Some of my players in my regular AD&D game have years invested in their characters. They've faithfully played almost every monthly game and I've seen their PCs grow. So this Sunday brought the potential lethality into crystal clear focus.

The PCs were facing some strange creatures in a field that had attacked and poisoned a farmer. There was much scoffing and shrugs and laughter of "Oh, we'll take care of this little problem." They went to the field in question, but the tall grains did not allow them to see these creatures. The Paladin of Tangadorin - Grel - summoned the aerial aspect of his war steed and rose into the sky to see what he could see. There were four small leathery creatures that looked like grotesque balloons with arms dangling from underneath. There was a fifth larger creature in the center.

Grel descended to get within bow range to use his newly acquired skill - shooting from horseback, having trained in it. What he didn't expect was that the four smaller creatures rose in the air to counterattack! One viciously bit his horse and left a bleeding wound (1d4 rounds of 1d4 bleeding damage). Another managed to bite him!

The entire table went dead silent. Bryan looked stunned. He's a 5th level Paladin, probably 6 years in development. (He plays several characters and it's a montly game, hence the slow progress.) I can honestly say that the color left his face. 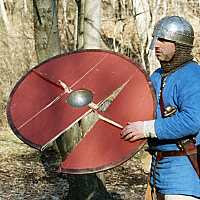 Then as he had the dice, he turned to me with a huge look of relief - "I'm going to use the Sack the Shield rule!" (If you have a shield, you can sacrifice it to absorb a blow.)

Now I take a wide latitude with situations involving death. Should I have allowed him to use a shield sacrifice if he was using the bow, and on a flying horse? Should he have invoked it prior to the poison save? Perhaps, but again -- death is on the line and I could see across the table that this had went from "Aw, this is a nothing encounter" to a very serious, focused group of players. I take a gentle touch in these situations, because death is often a huge possibility in my game. Grel is usually the tank of the group.

So he sacrificed his shield, the blow was ignored and the combat was prosecuted in some of the most efficient ways it could be. Spell casters and missile shooters were all focused on taking out the small creatures and multiple spells and missiles hit the bigger creature when it burst from the field towards the characters. The illusionist distracted it with dancing lights, the druid hit it with entangle and the archers poured arrows into it.

It was probably another thirty minutes that Bryan looked like himself again, because this was a very close call. It was a good reminder to the group that death is very real and that each action has a consequence.

It was a good weekend of D&D, full of the moments that we love to have.