Tucker's Kobolds or The DM as the Monster

"Sly Flourish" aka Michael Shae asked something on Twitter this past Saturday morning that got me to thinking... 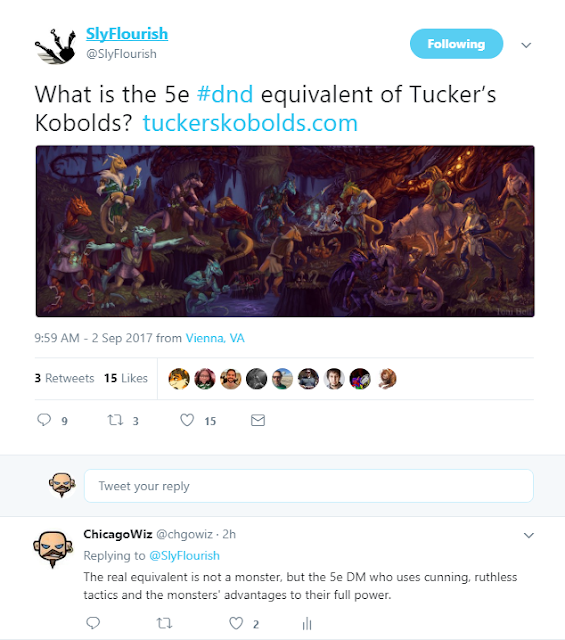 Mike asks a lot of questions, mostly from what I would call a nu-school perspective. His question here, the way I took it, got me to thinking about how the expectations of the DM have changed over the editions, to where something like Tuckers Kobolds aren't see today as they were in the past.

Mike's question is "what monster should be the 5e Tucker's Kobold" and I think that question completely bypasses what that article really was speaking about:


One of the key problems in adventure design lies in creating opponents who can challenge powerful characters. Singular monsters like tarrasques and liches are easy to gang up on; the party can concentrate its firepower on the target until the target falls down dead and wiggles its little feet in the air. Designing monsters more powerful than a tarrasque is self-defeating; if the group kills your super-monster, what will you do next ... send in its mother? That didn't work on Beowulf, and it probably won't work here....


In all the games that I've seen, the worst, most horrible, most awful beyond-comparison opponents ever seen were often weaker than the characters who fought them. They were simply well-armed and intelligent beings who were played by the DM to be utterly ruthless and clever. Tucker's kobolds were like that....


If kobolds could do this to a group of PCs from 6th to 12th level, picture what a few orcs and some low level NPCs could do to a 12th-16th level group, or a gang of mid-level NPCs and monsters to groups of up to 20th level. Then give it a try. Sometimes, it's the little things ... used well ... that count.

Tucker's Kobolds were an example of a focused and intentional move by a Dungeon Master to inject as much challenge into the game as possible. Taking the lowly kobold and making them in fire-chucking, deadly-trap laying ninjas who ate the players' donkeys (and lunch) is taking advantage of the terrain, of focusing on the kobold's strengths and minimizing their weakness - the simplest approach to war and combat that leads to victory.

Mike's question is reflective of what I see as the viewpoint that the Dungeon Master should be nothing more than a story-teller, a setter-upper of bowling pins and then get out of the way. The person who announces at the "right" time which treasures have been found, does the math for the CR of the "encounter" and the XP earned. I do not have the 5e Dungeon Master Guide, but I've read enough to know that a lot of rules interpretation and implementation has been given back to the DM explicitly. It does seem, though, given the questions I see on Twitter and around the Intertubes regarding 5e still seem to reflect the opinion that the DM should not be an active participant - that there are right ways to DM that don't set up the DM as the Monster.

I think that's the wrong message. The DM *should* be The Monster - the meanest, baddest sumbitch around... when it's time to be that monster. The DM should be Tucker's Kobolds. It doesn't matter if you use goblins, kobolds, mephits, sprites, you name it... what matters is moving into the mentality that as a DM, you can play this game as hard as the players are playing it. Even more so.

I've seen the "rut" hit at my table - players assume that the next battle will be a simple affair, toss a few Hold Person spells, a Web or Sleep here and there, and loot the bodies. That's when I up the game - ambushes, distracting traps that start to consume a lot of resources, using lots of little creatures that take utter advantage of terrain (cover/concealment/escape routes) and their willingness to use oil, acid, fire, water to challenge the players to the max.

Yep, I said it. Aiming to kill all of the players. That's what a group of kobolds and goblins are going to do. Drive off the invaders, or kill them to the last one. If the PCs surrender or barter, perhaps listen, if it's to the monsters' interest/advantage. Otherwise, GTFO my lawn! As a participant in the battle, that's how I approach the combats. I roll the rolls in front of the players. I watch as they struggle, succeed, run away... and then the next round begins.

Example -- I had 20 zombies, 4 ghouls. I sent them as waves, dividing up the forces in 4 groups. The cleric was forced to make 4 turn rolls, which gave me better odds that they might fail and leave some of the monsters unturned. (They did fail, leaving half the monsters left.) Now what?. So send the zombies in to soak up some of the players and focus the ghouls on the strongest character. Two ghouls, 1 4th level fighter. At some point, those claw/claw/bites are going to hit and the PC is going to fail the save. The ghouls will move on to the next. The weaker PCs who are fighting the zombies might get past them.. but those d8 slams are going to hurt.

This setup and approach forces the PCs to have to do the same exact thing I am... evaluate strengths/weaknesses. What can they do? What would you do at this point?

There isn't maliciousness in my intent, this isn't an ego "I will WIN" kind of thing. It's setting up a challenge in the game that is appropriate for D&D - any version. In the 9 years of my campaign, I've had only 1 TPK and 1 near-TPK. My players know when I've gone into Tucker-mode and I see them pay attention, plan hard and figure out how to beat me. As they should. This is a game, not a story recital. Play to your best ability and you will beat me... eventually. I just might toss a few molotov cocktails or counterspell your Sleep ... or worse, spread out so that Sleep doesn't help so much. But... the PCs will most likely carry the day.

What do you think?
Labels: D&D