How I Started My Sandbox

Nine years ago, I started on a little experiment. Over time, it grew in directions both bad and good. Over those nine years, I've blogged a lot about my Dark Ages/Chronicles of Etinerra campaign, but it might help to take a step back and go back to the beginning - especially as the topic of sandboxes is very active on the more nu-D&D related blogs these days. 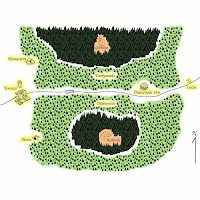 In the beginning, there were three hexes!

Well, actually, in the beginning, I wrote a story that helped to capture the vibe of a West Marches post-apocalypse fantasy world. That was the fuel for my imagination to help me picture what the players would first run into.

This was over the holidays in November/December of 2008, so I had some time to sketch out some things, put together some thoughts. I hadn't run a campaign in over 20 years, back in the mid 80s! The thought of going back to 1st edition was fun, but scary!

I had 3 hexes. Hex #1 was the player's homebase, the town of Enonia and the Enonian Keep. Hex #2 was a mysterious monastery, overrun by Chaos. Hex #3 contained a bridge with a troll (who has the record in my campaign for 2 Total Party Kills) and an abandoned dwarven mine. That's it.

There were three hooks - treasure and gold to be found in the dwarven mines, mysteries and trouble at the monastery, and the legend of a troll in the Dark Woods at the bridge.

I had extremely rough, one sentence sketches of the innkeeper, the Marshal (local lord), a couple of merchants.

I had done the first levels of the monastery (I stole it from a published dungeon in Fight On #1 - The Ruined Monastery adventure) and the first level of the mines, I created that myself, based on the output of a dungeon generator that I've since forgotten which I used.

That's it for adventure material. Now I had written a lot about other things as part of writing for a blog, but not a lot of it was used or useful for the first couple of games.

After two games, I had not much more

In February of 2009, I wrote about my initial thoughts. One of the key thoughts was "don't overprepare!" That was a theme I stuck a lot to.

I had to prep a few "n00b" areas, some additional levels, come up with various things in the wilderness, random encounter charts that made sense, NPCs and locations within town, and that's about it. I've halted any further development because either 1) the players aren't nowhere near close to going anywhere else and 2) if they do, well, then we're going to wing it and have fun.

The funny thing is, that is still true. I have a lot of broad brush strokes for a lot of things. I have an online wiki hosted at Obsidian Portal for the last 9 years, mainly as a repository to just jot ideas down. Most of my hidden entries have one or two lines, at most. It is only when we get to that point, in play, or in preparation, that I start to flesh things out.

My map had broadened to a dozen or so hexes at this point, mainly because I had fun sketching out the surrounding area, but again, it was broad ideas.

After six months, it's a campaign, but still not much prep as you might think

After six months, I had fleshed out a rough idea of region around my town, but it was extremely fuzzy. I was still getting my footing on the campaign and how things flowed, but I had enough games under my belt to write a long blog post about dispelling sandbox myths and to have suggestions on how people could do this themselves. My main points were:

1. Just in time preparation
2. One page dungeon levels
3. Write it down - play it on game day
4. Let the players flesh things out
5. Broad brushstrokes to events and plots
6. Don't overprepare

The funny thing is, this is true 9 years later! My prep for game day is about an hour.

"But Chgowiz, what about that crazy NPC database and big wiki?"

Nine years ... that's a lot of thinking and writing, but this has been a game of slow addition. Of course, after nine years, I've tinkered with many things and have tried quite a few, abandoned a good portion.

But at six months, I didn't have much more of the map made, because the players hadn't gone there yet. They were still poking around the monastery and the dwarven mines. They couldn't make up their minds to which hook to take, so they dabbled in both... and that was OK!

The world marched on, the Dark One's plot was a long, slow developing story and the players hadn't done anything - yet - to affect their plans.

After 1 year - the maps get updated, the story moves on

After about a year, I had a large map of the duchy that my tabletop game was playing in. 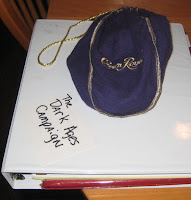 I was enjoying running this world so much, I made the crazy decision to start an online play-by-post game. I had more experience with generating a hex map, I had a spreadsheet that helped to automate this some, so I sketched out the town of Skalfier with the same few NPCs, but I generated about 90 "five mile hexes" in about two hours. Here's an example of what I had in my map key:

216: The grasses in this area seem thicker than usual and almost alive. Movement rate is halved in this hex.

613: Several mass graves have spoiled the water here. Anyone who collects water needs to make a saving throw or become violently ill for 1d6 days.

910: The grass is unusually dry in this area. There is a 25% chance of a wildfire starting in this area if a campfire is made.

1512: Rockslides – deep canyons run through these badlands, if random encounter is rolled, players must save or take 1d10 damage.

Again, not much, just starting points that if the players were going to go there, I could riff off of what I had written and come up with a great adventure.

The neat thing is that 8 years after creating this map, a good 80% is STILL just rough sketches.

The theme I am coming back to, is that prep doesn't have to be this big worry, nor does coming up with some huge story or overarching plot. In both games, I had a little idea, a germ, that I fleshed out during play and as I prepped for more play.

Any long time that I spent on this game, was because I chose to, because I love to do that sort of thing. It's my creative outlet.

After 3 years - the campaign pauses

My online game had to end, thanks to the end of Google Wave as a technology. My tabletop game came to halt after December of 2011, due to a project that consumed all of the time and energy for me and my wife. For almost 3 years...

But at that point in my campaign, I had fleshed out a lot of the original dozen hexes with villages, NPCs, locations and a world-wide story. I also had finally created a continent scale map, fleshed out regional borders and the capitals of each. If you click on the image, you'll see the tiny bits of yellow... in the middle right and lower left? That's all the area I had any sort of detail for. These hexes are 1 day travel in size (~ 24 miles). This continent is HUGE! But all I have are broad brush strokes for the rest of this. 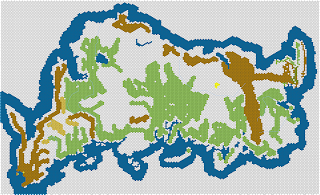 After 9 years - the campaign evolves

After a pause from late 2011 to mid-2015, I restarted my campaign first in the online play by post world, and then tabletop. It was a slow restart, but it gathered steam and after about six months, we were trucking along like gangbusters.

I changed my campaign approach, in terms of how the campaign "felt", quite a bit. My prep, though? Pretty much unchanged.

Broad brush strokes.
Details when I need them.
Let the details come out in play and as inspired.

I also began to make my world more complex, because I was ready to. I now run wargames in my campaign world. The results of these battles do affect RPG play in my campaign, and vice versa.

I keep track of my NPCs and their lives. I've automated it through an Access database. When the campaign world flips a year, I click a button and randomly generate events. I take a look at them, decide what I like and what inspires me and weave that into the NPCs stories and what is going on in the world.

To be honest, I've probably spent more time writing this blog post than I spend in prep. I am working off of a rich content base, for sure, because that's a lot of games and thought I've spent in the last nine years.

But I started with three hexes.

And you can too!
Labels: Chronicles of Etinerra campaign D&D wargames