Sandboxes and Players - They Make The Story! (Part 1)

I've found a couple of interesting blogs over the summer that have made for some interesting reading. One of which is DMDavid's blog - he seems like a nice guy, has some good ideas and he's clearly played in both Old-school and Nu-school worlds. Like any good DM, it seems like he's taken lessons from everywhere.

Then today, he wrote a blog post about sandboxes - Why Dungeons & Dragons Players Don’t Love Sandboxes as Much as They Think 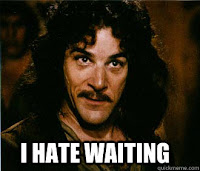 There are several things that I'd like to comment on and give some perspective. I've been running a sandbox campaign for nine years, fairly successfully. I have three ongoing campaigns within that same sandbox world, as well as many convention games and wargames happening. All (mostly) concurrently. All (mostly) affecting each other. So, I'd like to think that my experiences may be of value.

David writes:
Original Dungeons & Dragons never started as pure sandbox, because the rules included a goal: Take treasure from dungeons and the wilderness. By rule, characters who won treasure gained experience and power. They won D&D.

When the original D&D characters reached high, name level, the game turned into a sandbox where players chose a new goal for their characters.
...
Instead of embracing the freedom of a high-level sandbox, players returned to dungeons.

OD&D was not written from the perspective of pro-sandbox or pro-railroad. It was a toolkit for executing campaigns. There's plenty of evidence that there were many sandboxes that had plots woven within them (see Greyhawk, Blackmoor, Empire of the Petal Throne, Arduin that were released as rule books/game settings) but that allowed the DM and players the freedom to do with as they wanted.

I believe that if players were returning to the dungeon, it wasn't from the idea that players hate sandboxes, but that it's easier to run a dungeon than a vibrant, alive world. It is hard work to map out NPCs, dynamics, world events, regional events, local events and weave the tapestry that your players then come in and reweave on a weekly or monthly basis! Of course having a dungeon is going to limit the scope versus a world.

I run with OD&D and AD&D. I award XP for monsters killed/dealt-with and treasure obtained. I also award eXPloration XP, I also increase a player's level for having achieved an organization's goal or having done something that raises their own stature. Did you just make your diety's religion more important/relevant or complete some major goal for that church? Tada! You've been awarded next level because your organization has elevated you. That was an idea stolen from one of the truly great sandboxes - Professor MAR Barker's Tekumel (the aforementioned Empire of Petal Throne).

David goes on to write:
When dungeon masters offer a true sandbox and come willing to improvise any course their players choose, they confound players. Once the players stop wondering what they’re supposed to do, they struggle to choose from boundless possibilities. Whatever they finally decide, they leave the table with a nagging feeling that they chose wrong.

This is a common fallacy - that sandbox DMs are supposed to just sit there and wait for players to decide what to do. If you want to take an outlier, edge definition of sandbox, then this follows, but I don't think that's the typical case.

At least it hasn't for me. I run a West Marches style of game. That means the players came come up with the mission that I prepare for. If, during the game, they choose to go somewhere else, I'm perfectly happy to present them with gnomes in hardhats, busy building up a portion of my world with huge "CONSTRUCTION AREA" signs. Or tell them to go away for a half hour while I whip up what I need to do prep for their change of plans. Fortunately, they don't do that.

I never ran a sandbox as such a sterile Mars-like environment. No, when players enter my world, they are in a VIBRANT, LIVING world. Now, is that overwhelming? It could be, which is why I dangle three or four things for them, based on what kind of characters they are. My players have ignored plenty of hooks, but that's the point - the sandbox doesn't rely on them progressing from point A to point B in a proscribed manner. It will, however, continue on if they choose point X to point Y. A and B will still happen and do things, but without player involvement. 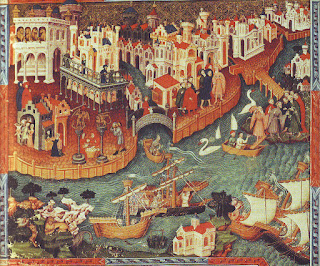 Real life example - my players spent an enormous amount of time splitting their efforts between an abandoned dwarven mine and a monastery teeming with Chaos. It took them two years to complete one thing. That meant that as they explored the mines, the Chaos monastery was increasing in power, it's denizens getting closer to the goal of bringing a Dark One into the realm. When they went back to the monastery, the mines repopulated with weirder creatures and Bad Things started happening.

But that's the point of a sandbox - that you don't have a monolithic plot driving your world - your world, and the players within, drive the plot!

Wow, I've written a lot words here and I still have two more disagreements with David... so stay tuned for tomorrow! (The second part is here.)
Labels: D&D