Gary Gygax famously wrote that Dungeon Masters must keep careful track of time in their campaign, for ensuring that player resources were being used, for tracking for wandering monsters/encounters, and for determining player movement.

One of the things that some wargame referees/players will do is include the effects of weather into their campaigns and games. It makes a difference - ask the French or German armies about attacking Russia during rainy/snow seasons. 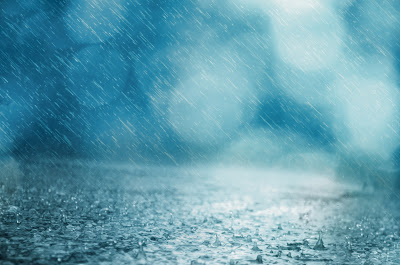 Now put the two together...

I track the weather as carefully as I track time in my campaign world. I don't (as yet) have some sort of climate model, that is far too much work and brainpower for me to engage in (right now). What I do have is a weather chart for the northern and southern climes of my campaign world, inspired by the books “The Solo Wargaming Guide” by William Silvester and “Ancient Wargaming, Setting Up a Wargames Campaign” by Tony Bath. 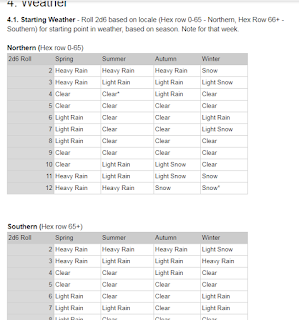 The questions for me have been:


I've adopted Tony Bath's approach for road types: Class 1 roads (think good Roman roads), Class 2 roads (dirt roads) and Country/Overland (which include trails and non-maintained roads. When there's precipitation, the Class 2 and overland roads are affected. Eventually, they dry out. But how do I consistently track that?

I had used Tony's method for precipitation affecting movement, but it felt clunky and didn't feel consistent. As a result, I adopted this approach - at the wargame/hex level:


4.3 Effects of weather on movement


Precipitation’s effect on weather are calculated at end of turn and applied to next turn.

So how do I translate the effects down to a D&D level?

No effect and impassable are easy - you either can or can't. At the strategic level, I track movement at a week scale, so a -1 for an individual rider or small group doesn't seem to really matter so much. At the -2 level, I might cut down the overland movement rate by about a quarter. That would indicate that the country or dirt roads are starting to get rough.

For missile fire or other things affected by precipitation at a D&D scale, if the week is a heavy rain/snow weather period, I roll a d6. If it's a 1, then the weather is not happening bad enough to affect the action. Otherwise, missile fire is lessened to short range only.

I should also note that I don't go for uber-realistic - more about consistency and the effect.