Sandboxes and Players - They Make The Story! (Part 2)

Yesterday, I started a (soft) rebuttal of DMDavid's analysis of sandboxes and why players "don't like them." I'll continue that today and wrap up with some thoughts.

David continue in his post:
Many sources of DM advice suggest seeding a sandbox setting with hooks—opportunities for players to land in stories of their choosing. Exactly. Those hooks help players narrow all the options of an open world to a sweet spot of three plus infinite choices. They nudge the game a bit closer to the railroad end of the dial. Some railroad-phobics might even argue that such hooks show a DM working too hard to push players through a story. Their ideal game only works with perfectly spherical, frictionless players. The real players at your table want hooks.

I have to admit, I've seen maybe one or two people in many, many years of playing and DM'ing that were that... rabid. I think this is a stretch to say that once you have plots or hooks or *gasp* stories within your world that this somehow negates it being a sandbox.

I think this viewpoint goes back to a misconception of what a sandbox is, and it's worth repeating:

When players enter my world, they are in a VIBRANT, LIVING world. Now, is that overwhelming? It could be, which is why I dangle three or four things for them, based on what kind of characters they are. My players have ignored plenty of hooks, but that's the point - the sandbox doesn't rely on them progressing from point A to point B in a proscribed manner. It will, however, continue on if they choose point X to point Y. A and B will still happen and do things, but without player involvement.

A sandbox environment still has walls, still has only so much sand and so many tools. Even with my (probably crazy) world where I have a database to track NPCs, where I have a pretty big wiki on Obsidian Portal that maps out a world, with a lot of it being GM Notes, where I have 3 ongoing games, 2 wargame campaigns and many convention games - even with all that, I have limits. Some of them are structural in nature, some of them are based on what is possible. I don't have limitless planes. I don't really encourage mustard farming where there is war next door. But at the same time, my players know this, and know that if they all really want to farm mustard, then I will set up a great game of Fields & Flagons. Just expect the goblins to come a'raiding eventually... the world continues to move on!

David concludes with this bit:
Despite the freedom of a dungeon sandbox, most D&D players craved story and deeper motivations. The D&D game changed to provide. When Tracy and Laura Hickman penned a series of classic modules including Ravenloft and the Desert of Desolation trilogy, they led the change. Their introduction to a self-published version of Pharoah gives D&D adventures four, new requirements:

A player objective more worthwhile than pillaging and killing.
An intriguing story that is intricately woven into the play itself.
Dungeons with some sort of architectural sense.
An attainable and honorable end within one or two sessions of playing time.

This bit of history leaves out one main point. If pre-80s D&D was too much freedom, the end result of Hickman's style was too little freedom. 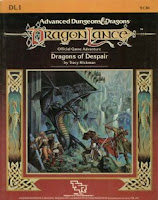 Want proof? Take any Dragonlance module. Now, attempt to do something completely different. Perhaps, let's say... in DL1, the players recover the Blue Crystal Staff. But instead of going to the jungle city of Xak Tsaroth, the players are like "F this. We have this awesome staff. We literally just barely survived to get this damn thing. Let's go spend time in Solace and oh, let's go back to Riverwind's village and do a little attitude adjustment. Then we'll think about what we want to do."

Module breaks. World breaks. The modules are written so that the story cannot be changed. You must go to Xak Tsaroth and Do The Thing.

So yes, there's a player objective, but it's a pro-scribed player objective. There's a story and it's woven so tightly into play that you cannot, must not, will not change what you do. You are a puppet. You must Do The Thing As Written. Amen.

If there is a railroad module, the Dragonlance series are the prime example. Which, to be honest, makes sense if you want to play D&D re-enacting the events of a series of novels that the Hickman's wrote. If that's your joy, awesome, have fun!

But to slam sandboxes and say that the Hickman modules are the perfect anodyne... man, David, I like you and all, but that is a huge stretch!

It's time to wrap up about sandboxes and my rebuttal.

One thing David is quite correct about -- too much of a sandbox kills players' interest. However, there's the corollary, which I believe the Hickman style of adventure promotes - when there is no player agency possible, it changes D&D from a game to a re-enactment.

The best games in the middle, for the type of game that you (as the DM) and you (as the player) want to have.

THAT, my friends, is where I believe the OD&D and AD&D end-game and goal is. How you get to that point is up to you or your DM, and hopefully they're doing an awesome job with you in having that kind of game.

And David... despite feeling like this was a sandbox hit-job with some of the myths used, I think you write some good stuff, regardless if we agree/disagree! I hope you visit the blog and let's talk!
Labels: D&D