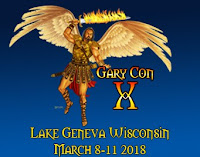 The TENTH GaryCon is coming! Holy cow, where did the time go? It's coming and I've submitted three games for consideration. I'm hoping to play as much as I can in March.


A Ford Over Troubled Waters - The Bestials hold Castle Ost. The Civilized Races hold Giant's Keep. Between them is the Whiterun River and a strategic ruins of the old Fordhold. There may be a dragon living there! Who will take Fordhold? Who will defeat the dragon and claim its hoard? Take one of two sides and fight to the finish in this fun set of old school miniatures rules with lots of figures on the table! Using Ral Partha's re-released Chaos Wars miniatures game and (hopefully) 100% Ral Partha miniatures on the table! This is also a play-test for a daylong battle I hope to run at Little Wars 2018.

Saturday Night AD&D - Delve into the Deeps - Jump back to the 70s/80s as we enter the dungeon on Saturday night! You've been hired by a wizard to delve into an abandoned Dwarf stronghold. Can you figure out why they disappeared? What treasures await the brave or foolish? What horrors will you find in a centuries old buried complex? Play in Chgowiz's campaign world and survive! Tucker's Kobolds might make an appearance. Pregens provided!

Battletech -Unidentified Targets Inbound - It's been two years since the Poulsbo horror: a contagion that swept the population, a mysterious vanishing Jumpship, a lost Marik BattleMech Lance. Now, the strife-torn planet of Pencader is about to find out what terror is—a drop ship descended towards the Starport from an unknown Jump Ship and all contact has been lost. Your lance will investigate the mystery and hope to survive what you find! This continues a sci-fi/horror Battletech Sunday game I ran at GaryCon VIII.
Labels: Battletech Chaos Wars Chronicles of Etinerra campaign D&D GaryCon