I started this series to explore the updated release of "Chaos Wars", a set of miniatures wargaming rules by Ral Partha. In Part 3, I played a game of Chaos Wars that added morale and rallying to the mix, leading to a game that took half the time/turns to conclude!

In this part, I'm adding Terrain (Section 8), Characters (Section 4, plus inclusion of new bits from previous rules) and Challenges (Section 15).

Now come the Days of the Fiddly Bits... as these rules start to add in look ups and specials rules that bolt onto the basic mechanics. 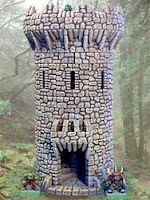 Terrain is pretty straight forward, it provides bonuses and penalties for ranged attacks & melee, as well as affecting movement. Most wargamers are used to this, so it's not out of the ordinary. I wish the terrain effects were on the reference card that you can print out (or comes with print orders), but I may have a bit of experience at creating reference sheets, so I can make my own.

What I thought was a really damn cool rule is that units can occupy buildings and shoot from them! Sweet-sniper-awesomesauce! Buildings can take damage from melee/ranged attacks, but Towers can only be damaged by creatures, artillery, and magic! I now have a reason to start working on a LOT more Hirst Arts towers. Aw yea!

So that's about it for terrain. The rules have a nice battlefield terrain generator, which is useful for solo games or games where the scenario doesn't specify terrain features.

Characters are just what they sound like, individuals of high power on the battlefield. Aragorn, Gandalf, Elric, Conan -- you know, the BBAMFs! (Although, I have to admit, I'm a little skeptical of superheros on the battlefield, thanks to Daniel Collins' thoughts on the subject from his D&D skirmish game... but this is fantasy, so I'll go with it.)

Each character has the equivalent of Armor Class, hit points ("vitality"), melee/ranged attack skills ("prowess") and magical resistance/power. You pay points to get the heavy hitters. There are four types of character "classes": Champions (Fighting Men), Priests (Clerics), Wizards (Magic Users) and Necromancers/Demon Summoners (Conjurers). You can also buy mounts for your characters so that they can ride with the cavalry, and you can also buy leadership "titles" for them.

This is where the real usefulness of Characters come in. You can "attach" a character to a unit. Depending on that character's title is how they can affect the unit's attacks and morale/rally. Which, as we learned last game, having a leader around to auto-rally troops is a big benefit!

Each army gets an "Army Commander" for free, so all you pay in points is for the type/power and if they're mounted. Adding subsequent characters requires you to pick a title (General, Colonel, Captain) which limits which units they can affect.

Characters can also fight as well, as part of the unit they're attached to, or individually. If they fight with a unit, they add a bonus pip to the attack roll. If they attack individually, their combat mechanic is a bit different - based on the "prowess" of their melee/ranged attack, they roll that number of d6s. Modified 5s/6s are hits. Here's the power inflation - if a character attacks a unit, they can kill figures! Superheroes indeed!

Including Characters adds the Personal Challenge to Event 1 - Initiative.

Personal Challenges are individual combats between characters/creatures within 12" of each other (except for Army Commanders, who may designate a substitute that is within 12" of the challenger). They fight one round of combat, either using a Ranged, Melee or Magical attack on each other. Damage is tallied up and then the next challenge is issued. Characters fight in only one challenge per turn.

A character can decline, but the first time they do so, the penalties are high for that turn, since the troops around them are all about "Hey, man... no guts, no glory! Some leader YOU are!" Future declines bring no penalties, since the troops already know the deal.

So personal challenges are a sweet way of having some one on one combat to whittle down the opponent character. That's very useful because losing vitality brings penalties as the hits stack up. And, if you manage to take a leader out, that means morale and rallies suffer.

Wow, that is a lot of text to talk about these bits, but Characters bring a lot to the table. So...

Let's see how they work in combat.

We're going to add in two Rank 2 Champions on either side of the fray. These are small forces and probably wouldn't attract the strongest of leaders. Since each side already gets a free Army Commander, we don't need to spend points to give them a leader type, and we'll make them both mounted on Standard Mounts, so that they can be attached to both cavalry and foot soldier types.

Meet Subchief Ushuk-Rifaah for the Orcs, and Lord Colinet for the Humans.


Set up was different this time, as I finally had terrain! I used some random dice rolls to place the terrain. (And please ignore the fall decorative table cloth underneath my el-cheapo green Easter table cloth. I didn't feel like lugging the 4x4 up the stairs... and this worked well enough.)

For the battle, the Humans are charged with protecting the village from the Bestial raiding party. The Orcs and Goblyns need to occupy or destroy the village building (represented by the two buildings. The orcs deployed to send the Goblyn foot as flankers, while the Orc cavalry would flank on the other side. The Humans deployed to keep their archers in woods (for protection) and near the buildings, while they sent footmen up the middle and to the right to oppose the center and flanking assaults. The Human cavalry would oppose the Orc cavalry. 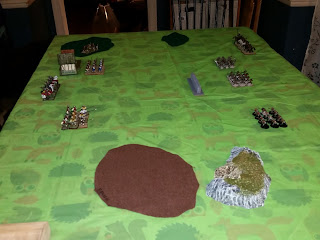 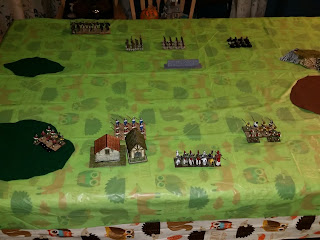 Turns 1 and 2 saw maneuvering and foot troops engage in melee. Terrain was a bit of a factor as the Goblyn archers in the center rear had to maneuver around the wall -- their objective was to start shooting at the buildings, as building terrain can take damage and be destroyed! Melee was inconclusive as all Goblyns and Human units passed their morale checks after taking casualties. 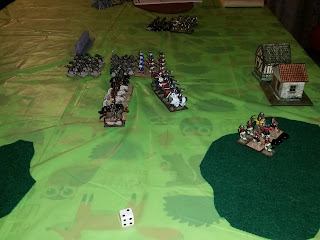 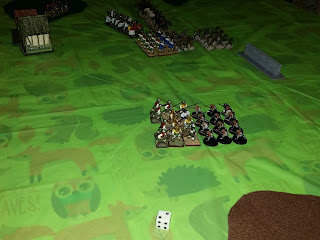 Turn 3 saw characters take the stage front and center. Being close enough, the Orc Army Commander issued a challenge to the Human Army Commander. The two faced off between the closing cavalry and engaged in battle... 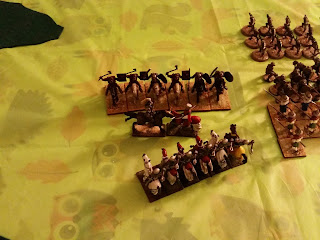 ... and killed each other! Both commanders had Vitality of 2, and Melee Prowess of 4. That meant I rolled 4 dice and 5s/6s were "hits". Both scored two hits on each other, reducing the opponents' vitality to zero... and there you have it. The leaders are out very quickly and that had serious ramifications later that turn!

The remainder of turn 3 saw the foot troops continue to lock in battle, with neither side routing and casualties mounting. However, the day wasn't good for the Human cavalry. Casualties and the loss of their leader/Army Commander was too much; they routed and were unable to rally themselves. The Human cavalry are out of play! (to the left of the battle)

It was at this point that I realized that I had forgotten to move my Human archers out of the woods (mid-left) towards the buildings, as they had been taking potshots at the cavalry, and I wanted them to occupy a building to protect it. Oops! 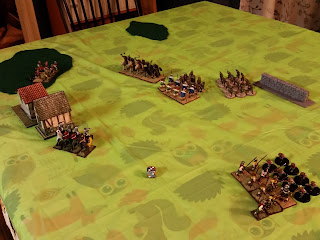 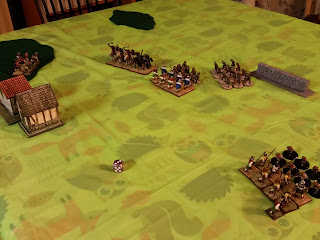 Turn 4 saw the human archers in the woods (to the left) pour arrows on the Orc cavalry, scoring a casualty and forcing them to rout. They then raced towards the village building to occupy it!

The Human foot in the center of battle crumbled to mounting casualties, routed and were unable to rally. Things are starting to look extremely bad, but the human foot to the very right manage to force the Goblyn foot to retreat and they then turned towards the Goblyn archers! 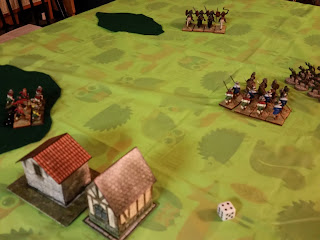 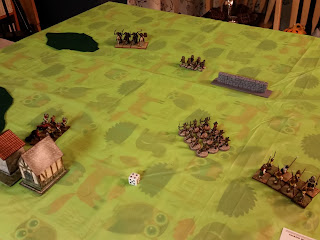 Turn 5 - The Human archers split move and fire at the Goblyns. (split move/fire - moving only half of their allowance to be able to fire during Ranged Attacks) Between the casualties from missiles and the ensuing melee with the Human foot, the Goblyn archers rout and can't rally.

The Human archers make it into the village building! This gives them a +2 on morale checks and forces attackers to either attack the building to destroy it, or suffer a -1 on their attacks of occupants. 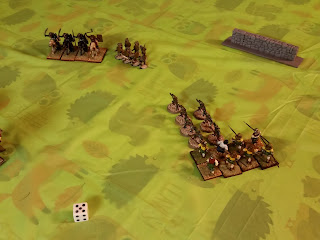 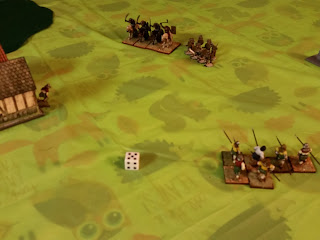 Turn 6 - 8 - The rallied Orc foot confront the Human foot in a key melee. Both units were routed, but the Humans, sensing that they were losing the battle, fled for their lives, leaving only the Human archers to protect the village!

As dire as that sounds, the Human archers had a chance! They had managed to survive the Orc cavalry attacks and had reduced the Cavalry to one figure. With the way the penalties stacked up for the cavalry unit, they had to roll sixes to cause even one casualty on the humans inside. It wasn't happening! Can the humans hold out? 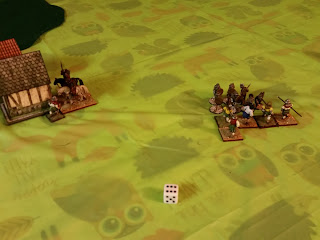 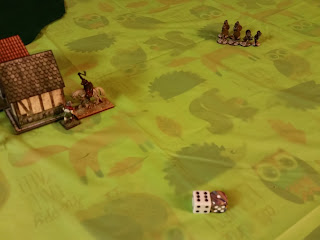 Turn 9 - the Orc foot join the cavalry in attacking the human's holed up in the village building. Unfortunately, the casualties were too much. The human archers routed, right off the board. The Orcs were victorious! The buildings burned while the Orcs collected human captives and looted their belongings... 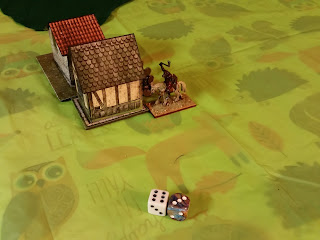 Well, that was interesting! Since the commanders eliminated each other early on, characters were a non-factor in this battle. The terrain made it interesting for sure though, between the orc cavalry not wanting to try and get to the archers in the woods, and then the archers almost pulling out victory by holing up in the building and whittling down their attackers.

Morale and rallies were a huge factor in this game for both sides. The human cavalry dissolving at the beginning doomed the humans, although it took awhile for that to play out.

Chaos Wars continues to serve as a fast, fun little game. This battle was over in about an hour or so. I am starting to get the hang of the modifiers and fiddly bits. I can see where the game would be very interesting with more units on the table. To that end, I'm painting as fast as I can!

Well, according to the Chaos Wars rules, they say this:

So that's how we'll do it! Next up is Fantasy Troop Types & Creatures. See you next time!
Labels: Chaos Wars wargames