This past Friday, my friend Chris and I took the new Pedion 3d modular terrain out for a drive as we conducted another episode of "Friday Night Stompy Bots." It was the first chance I'd had to play with the new terrain since getting it.

Once again, I arranged it in the classic Battletech map layout (as best as I could) and we went to it. Just a simple Lance v. Lance using the Mech Attack rules and my Battletech-to-MechAttack conversions. The terrain definitely made all the difference and we threw in a couple of adaptations to account for things like the trees. In the end, my inability to throw a d10 for more than a "1" when it counted allowed Chris to take out my two heavy 'Mechs, leaving a beat-up Medium and a very beat-up (and lucky!) Light. The Marik forces withdrew. Dammit.

Click to embiggen the pretty pictures...
The terrain is fantastic, after playing with it, I have two thoughts coming out of this:

1 - I need more trees! Must have more trees with magnets so I can make them stick! Sticky tack worked for my other 25/28mm trees, but I didn't want to put sticky tack on the flocking.

2 - One of my rough terrain tiles is warped in the corners. If you look at the first picture, you can see it next to the two mechs on the 6'oclock position. I don't think it came that way, I don't remember it being so, although looking at my pictures of the unboxing, I see that the other rough piece looks a bit warped up in a corner. Hmm.

Either way, I repacked them extremely carefully and we'll see if that helps. The slight warping in the corners wasn't enough to really matter, as the sheer fun of having this cool looking terrain made everything awesome!

We took a little time after to discuss the possibility of combining the old "Succession Wars" Battletech board game and the tactical game. I recently obtained a complete copy off of Ebay and it looks like a lot of fun! What we had hoped was to figure out a way of sliding up/down the scale so that our tactical game would have some difference or context for the larger game, even if just to add a +1 to the overall strategic conflict. 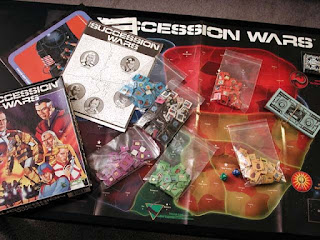 We just couldn't make it fit though. At the strategic/board game level, each unit represents 100 - 600 Mechs! Our little lance v lance battle is a drop in the bucket. We tossed around playing a Battleforce engagement or an Alpha Strike engagement, but that didn't seem to scratch the itch to have a "lance" campaign and a strategic campaign.

How would that work? Chris and I each track one lance and its Mechwarriors throughout the larger campaign. And fight a battle at the tactical level, within the context of the larger strategic game, for the lance. So that if the 3rd Marik Militia, of which my lance is a part of, fights vs. the Davions, then the tactical game we fight is with those forces, on that planet, but at a smaller level. And no matter if I won/lost, it has no bearing on the larger board game level.

However, the tactical situations/problems of salvage, damage, loss would persist throughout the larger campaign... and we deal with them. So if Davion mauls my lance, but at the strategic level, Marik wins the day, I still have to deal with the issues at the lance level.

On the flip side, if I won the tactical battle, and yet at the board game level, Davion "kills" the Marik unit, then perhaps my lance is transferred, or I have to wait until the unit is rebuilt in the board game before my "PC lance" plays again.

Hmmm... this requires more thought, but maybe that might work.

At any rate, it's become something we really want to try out!
Labels: Battletech Mech Attack