A busy week in February

So.. what are you doing, ChicagoWiz?

Well damn, quite a bit these days...

* My D&D campaign with the "Dark Ages" world has exploded into a lot of things going on at once, so it's a bit like the plate balancing going on.

1. The tabletop campaign has the sense they are about to finish a major storyline of what is happening in the Monastery of St. Eggyx. They've been at this since 2009 (with the big 4 year pause), but they've really focused on it (with a bit huge amount of prodding from the deities and a geas being placed on one of the PCs...)

2. The online campaign is going dungeon delving! They're in search of an old mage's library that might have books of information on the Lost City of Ramathia (Lost in the sense it was abandoned due to a volcano exploding and The Doom, they know *where* it is...) 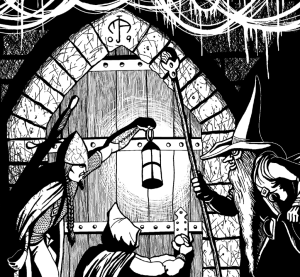 On the way to the old library, they met Sir Flinigan whose wife was taken captive by the library's guardians 15 years ago and he's been unable to rescue her. Now in his 70s, the PCs are his last hope of possibly rescuing her before he dies. He's coming with them. They just took their first steps in.

I'm listening to this cool, ethereal/creepy soundtrack (Abyssal Gaze) by Tabletop Audio when I write up my descriptions of what the players see in the flickering torchlight. Muahahahaha!

That graphic is by Mark Allen (marjasall) who allowed me to use the full version on my old Swords & Wizardry Quick Start module. I've got a color print of it above my desk at home. I miss Mark on the web, he did awesome work!

3. The wargaming/meta-game/strategic game is going on very well as a solo thing!  I started one scenario of orcs vs. humans in the Duchy of Pisces/Southron Duchy. It began in the Summer season, which is the same season my players are in right now... so I can't talk about the results as it takes time for news to travel from one side of the continent to the other. That was an interesting aspect of ye-olde-tymes that smacked me in the face.

But the dice told quite a story. The interesting thing is that all of this has happened through dice rolls and charts, I've not had any army v. army conflicts to resolve so far. That's coming though, when I start to play through the Fall season.

I've started a second scenario of orcs vs. humans in the Duchy of Dawn. The Duchy is already feeling the boot of the orcs, as half of the Duchy has fallen, the ducal family gone and there are only two large cities remaining - Reach and Ancturin. Possibly a place for the players to retake once they get powerful enough?

My Wargame Campaign rules are continuing to evolve as I go through these two scenarios, but I have a turn sequence roughed out and things are making sense. I don't have logistics figured out yet, but once I get through these two conflicts, or at least get them through a season or two, that's the next hurdle.

I'm struggling with figuring out how to take decent shots of my minis. I've read TheGoogle search results on this. I've watched the videos. I've done The Things. And yet they still come out crappy! Or maybe it's just my paint jobs. Here's a picture of an Intellect Devourer, WIP... and the lineup of what I'm working on after that. 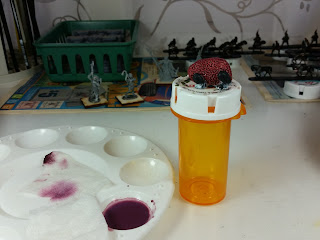 A couple of tips/tricks I've learned with all the things crafty...

1. Paint a black base/undercoat for the Hirst Arts walls and the Sculpey dungeon floor miniature bases. Makes it easy to just drybrush grey/white on top and viola. Versus doing a gray undercoat, black wash, white highlight.

2. With Milliput, patience is key. I finally had success with sculpting something in Milliput. Although it was simply a sleeve to reattach a staff head to the staff body, in the past, it would have been a blobby mess.

This time, I let the initial mix sit for an hour, then patience, gradual shaping and when it was "good enough", left it the hell alone. Viola. It "looks" right, it will fix the problem and I can move on with life without leaving a terrible looking lump on the top of my staff. 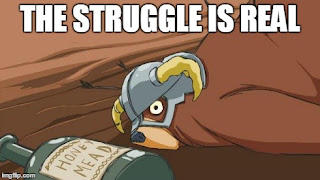 Oh... and on top of that, conducting "in between game" actions and conversations with the tabletop players on Rizzoma, which I continue to love as a game/PbP messaging system.

I do manage to sleep sometime...

If you made it this far... then come watch the Guardians of the Galaxy Dance Off, where the first graphic in this post came from. GREAT movie with an OD&D vibe...