Where have the players been in your campaign?

When I created the full Lands of Men hex map, I took a map of Russia and then folded, spindled and twisted the map to make something new, then put my campaign into it. When I started, I had 3 hexes. Now I have... well... this. (Click to embiggen) 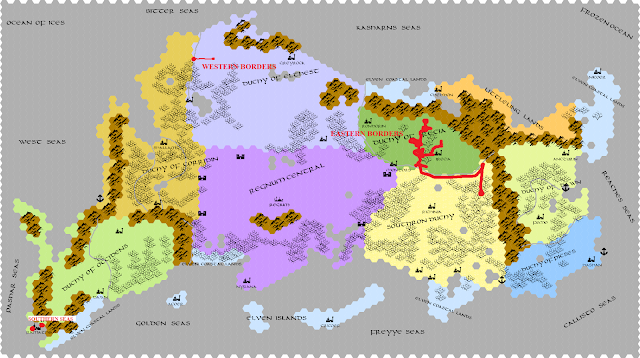 The areas in red are where the PCs have been, with a total of about 6 years of play (counting a 4 year campaign interregnum, we've been doing this for ten years.)

The Eastern Borders campaign is my tabletop campaign. They've ranged the most, having gone up towards the Sithasten Mountains when they freed the Marshal's daughter from the Black Brotherhood. They've traveled east to Irecia, the lost Diamond City. They've gone south into the Southron Duchy, into the Nisangel Forests to journey deep into the depths of Tuluk. It "feels" like a lot, but there is so much more to see and do!

The Southern Seas campaign is my play-by-post campaign. Those guys have been at this particular go around for almost five years. In that time, they've covered about two hexes of area, but then the pace of play-by-post is slower. Still, they've been in the mountains near orc territory, and they've sailed to the island city of Ramathia!

The Western Borders campaign is my online Roll20/Discord campaign. They started in January of 2019. While they've had a few hexes of travel while going to a nearby town of Tannia, they've mainly been in one hex of area, seeking to clear the ancient ruins of Griffon's Keep from an advance warparty of orcs, goblins and evil priests. This lies near their homebase of Gireford, a small village.

In a way, this is really cool to see, as well as eye-opening. There's so much space! So many things to discover, to see, to explore. I honestly don't think that I'll live long enough to see all of the major cities visited by PCs, much less every hex explored. That's... crazy.

Anyway, though I'd share this as I think this is hella cool! What about your campaign? Where have your players been? How much have they explored? What else is left?
Labels: Chronicles of Etinerra campaign