Playtesting is now complete on my Rescue of Hommlet scenario. My friends Chris and Alex came over this past weekend to beat each other to a bloody stalemate (or mutual defeat, depending on how you look at it) and it was great fun! 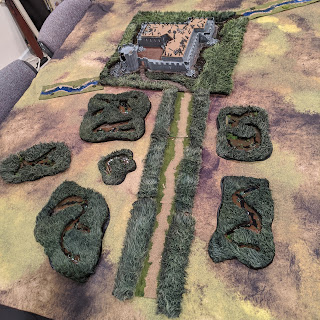 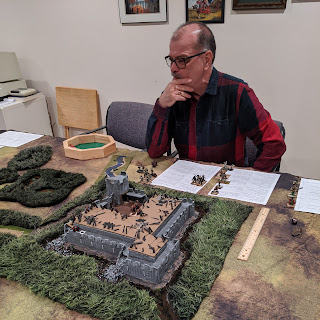 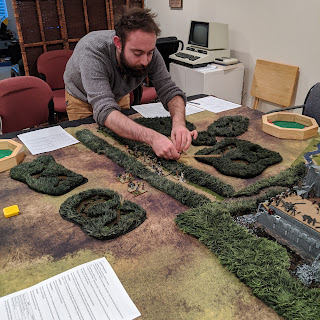 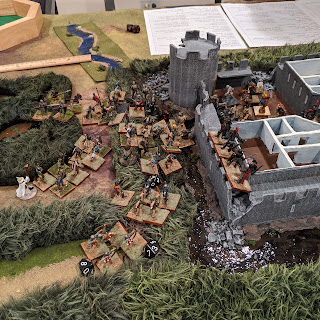 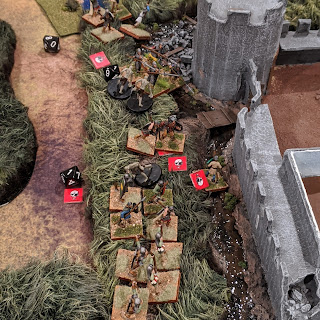 The final outcome for this run was all of Weal AND Woe's character/leaders dead. All of Woe's troops dead, but there were four ghouls left rampaging against the normal-men troops of Weal. They decided to GTF outta Dodge. So, technically, Woe was stopped from controlling the Moathouse (ghouls are just ... there.) but Weal paid a heavy price with almost all of the named/leveled characters from Hommlet dead.

Gloriously awesome fun. We had a daredevil mage, a thief who ran INTO the Moathouse building itself and promptly died, Woe looting the Ring of Invisibility from his corpse, an Ogre that died in one round, it was just glorious mayhem and great fun.

The good news is that the rules are tight. They flow well, we figured out the best way to deal with magic armor/weapons, everything felt like it really hinged on good tactics and some luck of the dice to either result in victory... or a messy finish.

I'm ready for GaryCon with this one!
I am lucky to have had enough interest that I can run two playtests of my "Heist of the Century" AD&D game. Tomorrow night, I'm going to watch the original "Italian Job" to get myself in the right frame of mind.

The nature of this game leads to far more roleplaying, investigative work and a lot of set up on my part to have the pieces ready for the players to find and do something with. That's the beauty and the X factor... this is all on them. I'm not driving this car, they are. I think, I hope... I've chosen the right template and module to emulate to make this work.

I've tried to remain somewhat vague about how I've put this together, because I don't want to give any spoilers away. Once GaryCon is over, I'll do a good review of that module and of how it went for me to put this all together. Who knows, maybe I'll get good at running heist adventures? I just need to survive this next week and see how it goes!
The GaryCon event registration period for Silver badge holders was ... pretty bad. I know that the official explanation leads to an architectural flaw in Tabletop.Event's setup, but it was pretty brutal. I've taken to calling it "The Battle of Tabletop Falls" (for TTE system falling down). I know I'm being charitable in the face of some people who are really pissed off. I can understand their frustration! Not many folks were able to register. Fortunately, it seems that if you were able to put tickets in your cart, you will still have them when they reopen registration. Folks are supposed to keep an eye on Facebook, Discord or the forum for updates. Here's hoping TTE gives GaryCon a HUGE discount!
Labels: Chronicles of Etinerra campaign GaryCon Rescue of Hommlet