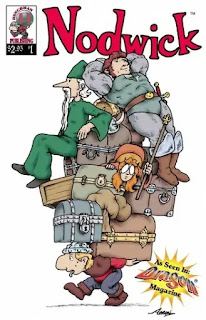 Ah, encumbrance. How I've loved to hate thee, but how I've found that thou art needed...

This is my simplified encumbrance approach. Many of you will recognize this as the approach from BX, but it's also the approach taken in Chainmail - encumbrance is based primarily on the armor worn, and then by what else the player is carrying.

To make it more simple, I've simplified that further into just number/type of weapons, amount of treasure or number of items in the pack.

This chart shows the progression of move rates, starting at what kind of armor they are wearing. Shield is included. Rates shift right as the PCs grow more encumbered and shift left as they grow less encumbered. (Note that I use the OD&D/AD&D rates of inches - roughly translated into tens of feet for folks using BX or retroclones.)


With these move rates, I'm also assuming a small amount of equipment. A light weapon or two and a backpack with a few supplies and equipment (less than a dozen).

For each heavy weapon or every three light weapons, shift one rate to the right.

For every 300 coins in treasure, shift to the right/heavier. (Alternatively, if they're carrying around sacks of gold - a small sack holds 50 gold, a large sack holds 150 gold).

I usually rule that more than a dozen items in the backpack/on the person requires a shift to the right. It's a rough guideline, if the items are large or bulky, it will be fewer items. If the items are small, I might allow double.

Strength counts! For AD&D, the damage bonus for Strength also counts how many shifts to the left (lighter) they get. For OD&D, Str 14 -16 shifts one left, 17 gives two shifts left, 18, three shifts left.

An example or two:

Kujo the Fighter is wearing chainmail and has a shield. He has a sword, and a backpack with a bedroll, 6 torches (I count the bunch as one item), a crowbar and ten days of iron rations (I'll count that as two items).  His move starts at 9".

In town, Kujo buys a bow and a quiver of a dozen arrows. He's still at 9"

In the dungeon, Kujo recovers a halberd from a dead orc. He now moves at 6", with the heavy/bulky weapon. Later in the dungeon, he comes upon a treasure chest full of gold and silver coins. There's about 300 coins in that chest, so he's now moving at (a very slow) 3"! I hope Kujo makes it!

If Kujo has a Strength of 16, then for both OD&D and AD&D, he would start at 12" and after his dungeon adventures, be moving at a 6" rate. Go Kujo go! If Kujo had been at an 18 strength, he would have remained at 12" the entire time.

So the question comes up "What's a little vs a lot?" "Why do you rule that someone is carrying a lot."

In many times, it's the duck test - if it quacks like a duck, then I'm pretty sure they're carrying too much. Often, I'll ask the player... are you carrying a lot?  Many times, they'll own up to their own encumbrance. If it "feels" like a lot to me, I'll have the player convince me that they're not carrying a lot. To me, "a lot" is a good amount of equipment, bulky books, weeks of food, etc. If I could go either way, I'll go in favor of the player, but honestly, we all know when we're probably carrying too much.

What do you think?
Labels: AD&D D&D DIY OD&D