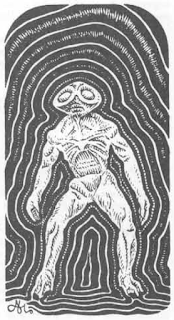 Different invisibility/blinking mechanic that I've used, instead of just a modifier to hit roll

Advanced Dungeons & Dragons presents a great many monsters who can have some really cool effects, but at the end, a lot of those effects get folded into simple "reduce to-hit by x" and it's done. Players know that the creature will be harder to hit, but that's it...

What if we made took this idea of an invisible/shadowy monster that's hard to hit, but rewards players who use tactics to overcome it's special ability?

In simple, what I'm proposing is doing away with the straight -4 penalty for hitting invisible/shadowy figures. Creatures get two ACs - one when they're "invisible" and the second when their location has been pinpointed. Let's take a shadow as our example - they'll have AC2 when invisible, AC7 when PCs know where it's at.

So the PCs would be groping around and striking out. As the DM, I'm keeping track of where the creature is at. I will let the PCs roll to hit, but for those that aren't within melee range of the creature, they "miss" and will do so automatically, but I don't tell them any different. Just that they missed.

For PCs that are within melee range, they are rolling to hit against the harder AC, so in this case vs. AC2 for the shadow. They hit!

Now the PCs have an idea of where this thing is. As long as the PCs are within melee range of the creature, it can be pinpointed and it's AC drops down to 7. So life is good, right? Well, not necessarily.

Let's say all the PCs miss in combat - I'm going to rule that they've no longer pinpointed the creature and now its AC is back up to AC2! It's managed to avoid being hit and seen, so it has a chance to slip away again! At this point, since they've not pinpointed it, it could even flee without penalty, though the PCs could hit vs. AC2.

So why would I do this? To me, an approach like this makes fighting an invisible creature more interactive, more mysterious and potentially more exciting. Rather than a boring -4 to hit, this allows the PCs to use circling and trapping tactics. If the PCs did circle the creature while it was pinpointed, then I would not allow it to slip away. It might go back to the AC2, but it's surrounded - nowhere to run!

This also requires a bit more interactivity with the players. They can just attack the darkness, but I as DM know where this thing is. If they're within melee range, I describe an effect (shifting shadows, distortions in the light) that lefts them know they're close. Attacking blindly? Not seeing the effect.

Once they hit, then they see blood/wounds/effects which allows them and others to hit better. The creature is obviously trying to get back to being hidden! So... if everyone misses that round, they're not able to see it as well, and next round it may slip away!

These are the kinds of small things I like to add to make the game more interesting. The players don't need to know the mechanics in shifts in AC (unless they ask), but they do see the effects. I find doing things like this makes monsters... mysterious. Unpredictable.

I've also earned the players' trust that I'm fair and always give them a path to success while also giving them an obstacle to overcome. Tactics helps with this type of monster (one person hits, rest form a kill box. Now it's trapped....)

Also, I'm using Descending AC, but you can modify Ascending AC in similar fashion, going from hard to hit, to easy to hit, once the creature is pinpointed.

What do you think? Do you use certain effects and different takes on mechanics to achieve an effect that makes the monsters more interesting?
Labels: AD&D Chronicles of Etinerra campaign